China’s DF-41 nuclear-capable intercontinental ballistic missiles are seen during a military parade at Tiananmen Square in Beijing on October 1, 2019, to mark the 70th anniversary of the founding of the People’s Republic of China. (Photo by GREG BAKER / AFP) (Photo by GREG BAKER/AFP via Getty Images) 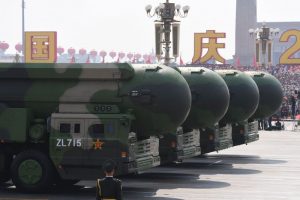