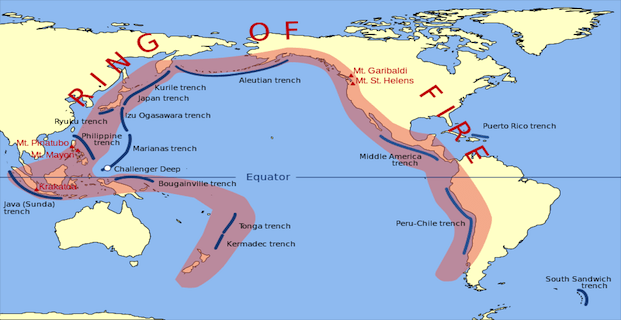 The Pacific Ring of Fire is the name that is given to a horseshoe shaped area in the Pacific Ocean which extends from South America and North America to Eastern Asia, Australia and New Zealand. This area is famous for its constant seismic activity and because of the amount of active volcanoes that can be found here. 75% of dormant and active volcanoes are found in the Pacific Ring of Fire. Now it is known that the area is very close to several tectonic plates which may be what influences the violent activity in the area.

Volcanoes In The Area

It is believed that the Pacific Ring of Fire has a total of 452 volcanoes. Some of the world’s most active volcanoes are found here. Kilauea which is considered the most active volcano in the world is located in the Pacific Ring of Fire. Other volcanoes worth noting are Mt Fuji in Japan, Mt. Saint Helens and Mt. Rainier in the American North West, Krakatoa in Indonesia, Mauna Loa in Hawaii, Galeras in Colombia and Sangay in Ecuador. Those are all volcanoes that are well known and some that could be very dangerous to the population nearby.

Because of all the activity in the Pacific Ring of Fire it is very possible that one of those volcanoes could cause a lot of trouble for a lot of people. If Mt Rainier were to erupt for example the 2.5 million people in the area near Seattle and Tacoma would have to evacuate fast. Adding to the danger is the snowy cap of the volcano which could make the dangers much worse.

The Santa Maria Volcano in Guatemala has already shown its power with one of the most catastrophic eruptions in the 20th century taking place in 1902. Back then the volcano affected a very large part of the south west of the country; today with many more people in the area the impact of this volcano in the Pacific Ring of Fire could be much greater.

Mount Yasur in Vanuatu is what’s called a stratovolcano and it has been erupting for close to a hundred years. The dangers that Mount Yasur presents are real, and yet tourists risk the dangers of toxic gases and lava flows by getting to the crater every day. This volcano has already taking a few lives from tourists and a tour guide who got too close to the danger zone.

The Pacific Ring of Fire is different today than it was thousands of years ago because of the changes caused by tectonic plates. The Pacific Plate will hit other plates nearby and that causes them to sink. The crust melts producing the magma that feeds the different volcanoes in the Pacific Ring of Fire or it will help produce new volcanoes. The tectonic plates are also the reason for the many violent earthquakes in the entire area of the pacific.

If you are in a city that is located in the Pacific Ring of Fire then you already know that there are several risk factors that you have to be ready for. Close to 90 percent of the earthquakes reported around the world take place in the Ring of Fire. Add to that the possibility of volcano eruptions and that can really be a dangerous area to live in. People not only have to look at the active volcanoes as the dormant ones also pose a threat. Mt. Saint Helens was a dormant volcano before its eruption in 1980 which caused several deaths and over a billion dollars in damage.