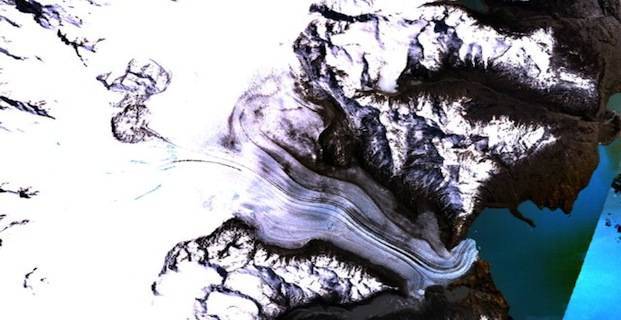 A subglacial volcano is a volcano that is located either underneath a glacier itself or under the water in a lake which is inside a glacier. These volcanoes are very different from the other types in terms of shape as they usually have steep sides and a flat top. The exception is in the cases when the subglacial volcano produces enough heat to melt the ice layer above it, in which case its shape will be more conventional.

Usually when a subglacial volcano erupts the heat associated with the flow of lava will cause the overlying ice to melt. When this happens, the water cools the lava very quickly in a manner similar to what happens with a submarine volcano and will therefore produce a flow with pillow shapes similar to an underwater eruption. With these eruptions however, the pillows will break off and fall down the slopes of the volcano, causing a formation of hyaloclastite, tuff breccia and pillow breccia (breccia is a type of sedimentary rock). Because of the water present during a subglacial volcano eruption, they can also produce lahars and dangerous floods.

A jökulhlaup is an outburst flood that is produced from a glacier. They are most commonly associated with a subglacial volcano and will occur when the heat from the eruption causes the surrounding glacier to melt, creating the flood. Although the term originated in Iceland to describe this occurrence in relation to their volcanoes, it is now used by geologists around the world. A classic example of a jökulhlaup is when Katla in Iceland erupts, it causes the glacier Mýrdalsjökull to experience this phenomenon.

The most popular locations in the world to find a subglacial volcano is Antarctica. This is because volcanoes in this area can be found spanning around 5000 kilometers, going all the way from East Antarctica to the Antarctic Peninsula and all the way to the South Sandwich Islands which are sub-Antarctic. Because of the large quantity of volcanoes combined with the cold environment and presence of glaciers, it is no surprise that the area is home to a large proportion of the subglacial volcano population.

The most interesting thing about this volcano is that it most likely still active, making scientists wonder what would happen to the surrounding glaciers if it were to erupt again.

Due to its cold environment and large number of volcanoes, Iceland is another place to find these subglacial volcanoes. In fact, in 2010 the subglacial volcano Eyjafjallajökull began erupting after 200 years of being dormant. There is another similar volcano nearby named Katla, whose eruption from one of its fissures in 934 A.D. created one of the largest known lava flows to take place during the Holocene. Although this volcano was more active in historical times than at present, there is still occasional small activity.