The Oceans are large bodies of water that seem to keep many secrets. Even today, while a considerable knowledge exists about the properties and life that develops near the surface, there is still much to discover in its depths.

According to various criteria, researchers have divided the oceans to differentiate the life that exists there and to facilitate their study:

Ocean zones according to their density .

Density is the mass quantity by volume of a substance, in this case, the seawater.

Surface zone or Mixed Layer.
In this layer, the temperature and salinity of the water are continuously changing due to the direct contact with air. Thus, reduction of the air temperature also causes lower surface temperatures.

The Pycnocline.
Changes in density do not frequently occur in this zone because there is not much movement in this area, and it is not in direct contact with air or with the ocean floor.

The Deep Zone.
The water of this layer is colder and denser than in the other areas.

The ocean is divided into three main areas: pelagic, demersal and benthic.

It is more common to classify the ocean layers according to their depth because many species are categorized according to the depth zone where they inhabit. Have you heard that there are deep-sea fish? They have this name precisely because they live in the abyssal zone.

The ocean is divided into three main areas: pelagic, demersal and benthic, depending on the sunlight that reaches the water and illuminates below the surface. 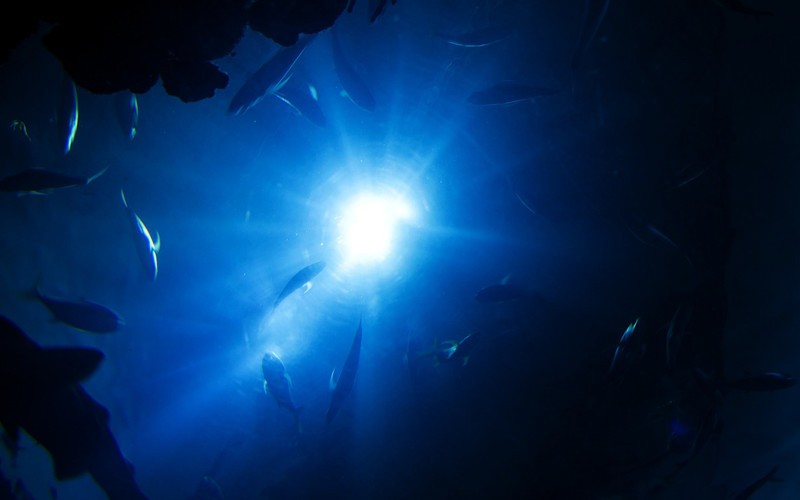 In Greek, the word means “open sea.” Pelagic is the upper layer of the oceans and covers about 360 million square kilometers of the Earth, and its volume is about 1,330 million cubic kilometers. It has a mean depth of 3.68 km. And a maximum depth about 11 kilometers. It is also called the “open-ocean zone,” and the species that live there are called “pelagic.” The pelagic zone has the following areas:

a. Neuston zone.
The neuston zone is the area that is in direct and immediate contact with air and extends to 1 meter deep. The word neuston refers to the microscopic organisms that live right in this area. It is rich in plankton; so many animals that live in lower areas tend to climb here to feed. Some authors do not consider the neuston area as an individual part of the pelagic zone.

b. Epipelagic zone.
The epipelagic zone is the surface layer extending to 200 meters deep and reaching about 60 kilometers off the coast. It is an area with lots of sunlight and home to numerous species, apparently more than any other.

c. Mesopelagic zone.
This area ranges from 200 to 1,000 meters deep. It is also known as the “twilight zone.” The temperature varies less than in the epipelagic zone, but similar to a thermocline region, meaning that the temperature varies with depth. Sunlight penetrates to a lesser extent, and from here downward some fish manifest bioluminescence. Octopuses, squid, and fish inhabit this zone.

d. Bathypelagic zone.
This zone extends from 1,000 to 4,000 meters deep. Sunlight does not reach this area, and there is an intense hydrostatic pressure. Its temperature is constant and freezing, around 4°C. About one percent of oceanic species live in this zone, and because of this, food is scarce for those who do live there.

e. Abyssalpelagic zone.
It comprises the region between 4,000 and 6,000 meters deep. As expected, its temperature is constantly cold, 2°C to 3°C. Life is very scarce because there are very few nutrients around, but some creatures can withstand the dark and pressure of this zone and can bear up to 76 megapascals of pressure.

f. Hadalpelagic Zone.
The hadalpelagic zone is the deepest part of the ocean, with a temperature barely above the freezing point. Sunlight does not penetrate to this depth, and nutrients are very scarce, though some unicellular organisms, worms, and sea cucumbers live there. It extends beyond 6,000 meters deep.

The demersal zone is located near the ocean bottom layer and above the benthic zone. The species found in the demersal layer usually look for food on the seabed or feed on other demersal species.

The benthic zone is the layer at the very bottom of the ocean floor, comprising the surface region and some sediment layers beneath the surface layer. It contains low levels of oxygen and cold temperatures.