Tides are increases and decreases in the sea level. Surely you've noticed this because it is a common and easily witnessed phenomenon. For a while, a boat floats near the shore, and after a few hours, the boat rests on the sand. When this occurs it is said that is low tide, and when the opposite happens, it is said that the high tide.

The tides are not unique in the oceans; they can occur in other water systems as long as the required conditions happen.

There are two types of tides: high tide and low tide. Also, tides may be semidiurnal or diurnal. These tides have one tidal cycle per day, meaning one low tide and one high tide, while the semidiurnal tides have two high tides and two low tides per day.

The tidal phenomenon was the subject of various theories until Sir Isaac Newton in 1687 explained that tides are the result of the gravitational attraction of the moon and the sun. However, first things first.

Some factors influence tides called tidal constituents. They are the rotation of the Earth, the position of the moon and the sun to our planet, and the shape of the shore and the seabed. Thus, the duration of the tides and their amplitude depend on these components and can last hours. 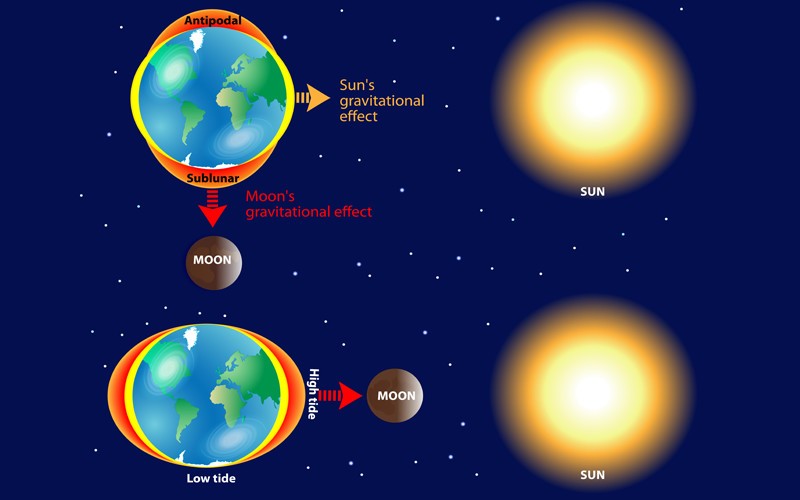 The force of inertia (property of staying in rest or motion) tries to keep the water at its normal level. Also, Earth rotates continuously generating a centrifugal force which causes oceans to protrude on the on the opposite side of the moon.

Tides are essential to generate tidal energy through turbines or other methods that generate electricity.

The inertia exceeds the gravitational pull and in short, two bulges of water that align with the moon are created as the Earth turns.
Oceans protrude two times in one period when they are on the side of the Earth closest to the moon and again when they are on the far part of the planet. In coastal areas, high tide occurs approximately every twelve hours and 25 minutes. If the moon is above your head and you’re on the coast, you should see high tide.

Tides are essential to generate tidal energy through turbines or other methods that generate electricity. Tidal energy is a renewable, clean energy and contributes to sustainability. Tides are also relevant for sea travel, and thus they are placed in nautical charts, indicating the direction and the speed that ships must observe during high and low tides.

The Tsunamis, are not related to tides.

There are tide-measuring stations that measure, describe, and predict tides.