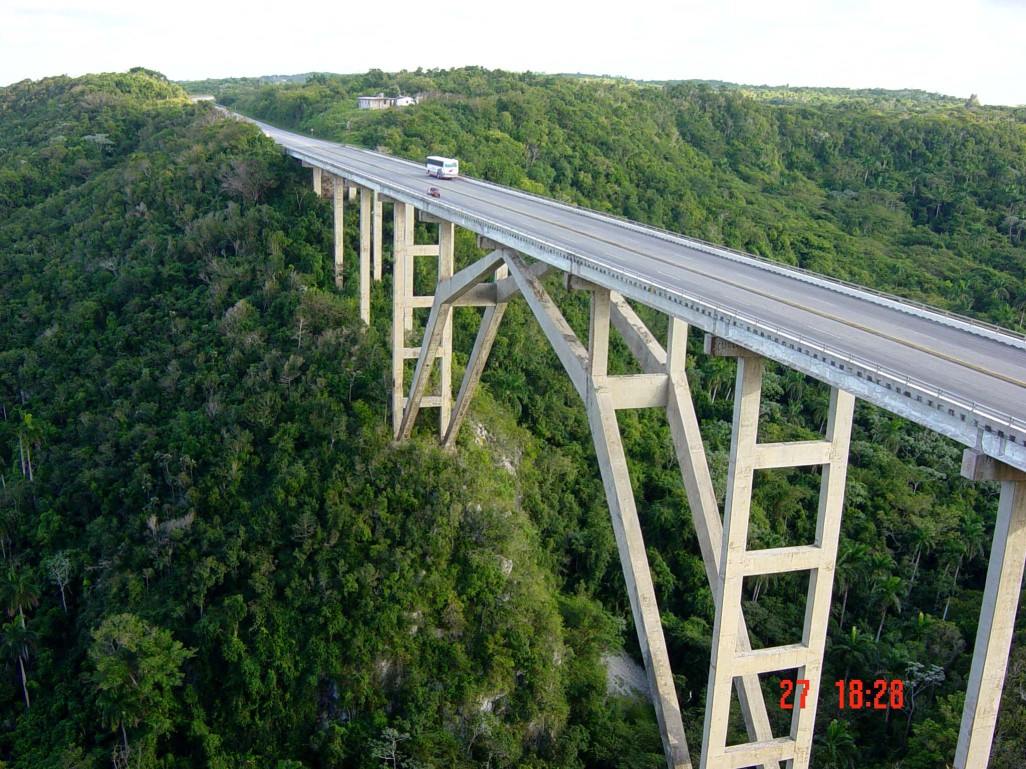 Man till now have created many of the architectural wonders.The bridge’s creation in the world is also remarkable as the bridges built in many places in the world are worth seeing due to their gigantic structures and large heights, and they’re extremely amazing equilibrium with which they are hanging up there.The height of the bridge can be determined by the height of the deck that can be the maximum distance from the ground or water to the road of the bridge.

The ranking of tallest bridges differs because most of the bridges are located in the areas of deep valleys. The structural height of the bridges identify its height from the top suspension point to the lowest visible point of the bridge.The bridges nowadays apart from being convenient pathways to cross the rivers, valleys and mountains have also become architectural antiques that have also become a sightseeing wonder for the visitors and the tourists who are usually flabbergasted by seeing these amazing human creations. Here is the list of the top ten tallest bridges in the world.

Top of the list is the bridge named Villau viaduct; it is world’s tallest bridge that is located in France. It was the wonder created by the French architecture named Michel virlogeux and a British engineer Norman Foster.The total height of it is 343 meters that are 1,125 ft tall.It has the longest span of about 1,122 ft. It is the most amazing cable-stayed bridge’s, and it was the first time opened to general public in 2004. It is considered to be the greatest architectural achievement of all times. It also received the international award of outstanding structure in 2006.

Second on the list is the Russky Bridge of Russia situated in eastern Bosphorous. Its.Its total height is 320.9 meters that are about 1,053 ft.It is also a cable-stayed bridge and was opened and inaugurated in 2012. It was built to serve the purpose of the Asian economic conference.It’s navigable channel is of bout 50 meters. The bridge is located in the place with very harsh weather conditions but still it is made much endurable to fight the hard winds, rusty frost, snow and heavy rain.

Located in China is the world’s third tallest Sutong bridge that is about 3o0 meters high.Its has a span of about 1, 088 meters. It is also a cable-stayed bridge and was opened in 2008 it is perhaps located in the area of Changchun in China.It has two long towers. It shortens the distance between the areas of Shanghai and Nantong, which before bridge construction was a four-hour tiring journey.China Harbor Engineering company played a pivotal role in its construction and design formation.

This bridge is located in an area of Kobe in Japan. It has the total height of 298.3 meters which is about 979 feet and the span of 1991 meters.It is the suspension bridge completed in 1998.It links the city o Kobe with the Awaji Island to the frequent waves of earthquakes in Japan this bridge has undergone many structural changes through these years to make it more earthquake proof, longstanding and more endurable.

Located in Hong Kong, this bridge is about 298 meters high that are 979 feet.Its span is 1,018 meters.It is also the cable-stayed bridge and was completed in 2009. It connects Nam Wan Kok Tsing Yi island with the stone cutters island.Its construction completed in 5 years and was made at the expense of 2.76 billion and was considered to be one of the very expensive bridges. The stone cutters is famous for its amazing architectural design won the 2010 supreme award at structural awards conducted annually.

Located in South Korea, Yi Sun-sin Bridge is ranked at sixth position in the list of world tallest bridges. It is a suspension bridge situated in southern part of South Korea. It was constructed to have the main route to Yeosu industrial complex.Its span length is 1,545 meters and was opened in 2012. Daelim’s engineering company completed the whole of its construction. Its total height is of about 270 meters and 890 feet.It was one of the nominees for outstanding structure awards 2013.

The Great belt east ridge is ranked at seventh position in the list of world’s tallest bridges. It is located in the area of Korsor in Denmark with the total height of about 245 meters which is about 833 ft.Its total span is about 1,624 meter. It is the suspension bridge’s and was completed and opened in 1998.It was completed and constructed by Danish engineering firms. It has significantly reduced the travel time in Denmark making the people crossing the grate belt in only ten minutes that previously took one hour on a ferry.

Zhongxian Huyu expressway is one of the tallest bridges of the world. It is located in China and is 247.5 meters long.It has the span of 460 meters. It.It is also a cable-stayed bridge and was opened in 2010.It is located in the area of Huangshi. It is located on the Yangtze River.The construction of the three gorges dam has increased the water level below the bridge.

It is included in the list of world’s tallest bridges. It has the total height of 242.5 meters. The span of the height of 926 meters.It is cable-stayed bridge completed in 2010.It is situated in Hubei province of eastern China.It is the part of two expressways.It is also one of the best architectural wonders and is created with high technical accuracy and precision.

It has the height of bout 241.8metres and total span height of 311 meters.It is cable-stayed bridge completed in 1993 in Mexico.It is situated n the Guerrero state in 95 highway in Mexico.It has about six spans constructed almost unevenly.It is also working on a toll bridge’s since 1995. It is the highest bridge in Mexico and one of the finest multiple cable bridges in the world.It has reduced the distance of 49 km between the areas of Acapulco and Cuernavaca.