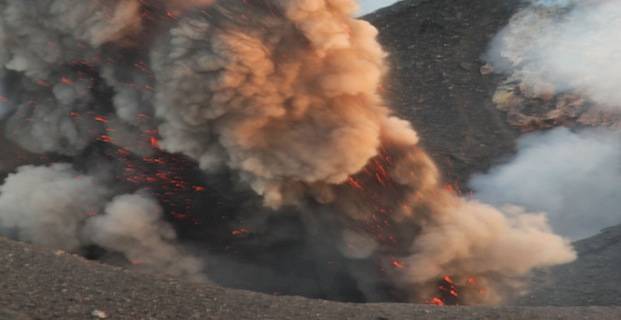 Effects Of Volcanoes – The Consequences

A volcano eruption is one of the most impressive events in the planet and the effects of volcanoes and their eruptions could be felt as far away as a different continent. The type of effects of volcanoes depends on the size of the eruption. Some volcanoes could be erupting and not cause much damage even to people nearby while others are so massive that should they erupt they could trigger a world sized catastrophe. So what type of disturbances would you see if there were a massive eruption today? To answer that question we need to be clear about the type of volcano that we are talking about. Volcano eruptions are measured in what is called VEI or Volcano Eruption Index which goes to a most powerful eruption of a VEI8.

If there were an explosive eruption in your area the effects of volcanoes could be devastating. During an explosive eruption the volcano will spew lava, magma and volcanic material which could travel several miles away from the mountain. The explosiveness of the eruption could also cause pyroclastic flows which would destroy anything within their path. The ash could also cause severe damage to structures depending on the amount of it and those who breathe it in would be at risk of choking on it.

Aircraft are some of the things that will feel the effects of volcanoes more than others. That is because the ash spewed by a volcano can negatively affect the engines in an aircraft. To make matters worse the problem has not gotten better. Pilots who have flown through a volcanic eruption complain about the fact that they lose power and when they apply the throttle the engine will become even hotter. When that happens more ash is melted and that creates abrasive material which ends up in the engine.

Effects On Cities And Towns

The effects of volcanoes on cities and towns after an eruption could vary from no effects at all to a catastrophe of immeasurable magnitude. A lot of the effects that a city will feel depend on the size of the explosion or eruption and the atmospheric conditions. It has happened before that the conditions will take away the ash from the city. On the other hand, the same conditions could direct all the harmful effects of the lava, the ashes and volcanic material straight into the city which could cause thousands of deaths or injuries.

To look at the effects of volcanoes in towns and cities it is a good idea to look at recent eruptions. When Mauna Loa erupted in 1950 the lava headed towards the city of Hilo.  Another eruption that took place in 1973 took place on Heimaey, Iceland and the entire town was buried under cinder and lava. In 1960 Kilauea erupted and it buried the town of Kapoho and in 1980 when Mount St. Helens erupted the ash fell on several towns in the states of Oregon and Washington. There are several examples of this type of volcano impacts on cities and towns.

Effects On The Environment

There are several ways in which effects of volcanoes can be felt on the environment. Even smaller eruptions can have a measureable effect. That is because while an eruption is taking place gases are released by the volcano. Some of the gases which are released into the air include carbon monoxide, carbon dioxide, sulfur dioxide, fluorine, chlorine, hydrogen sulfide and others. The effects of volcanoes on the environment depend on climate patterns, the overall scale of the eruption and how much the gases spread. Another problem the environment is the ash that is released when a volcano erupts. Depending on the size of the eruption you could be looking at a volcanic winter.

Out of all the effects of volcanoes on the daily life of people, the one that is the scariest is what is known as the supervolcano. These volcanoes are the ones that will reach the VEI8 and VEI7 rankings in the scale. These are also volcanoes which are very massive and could destroy most of the life on earth if they were to erupt today.

In the case of the supervolcano in Yellowstone Park several states and their citizens would stand no chance against the lava flow and the ash. However, those are not the only people that would be affected. During the explosion a lot of ash would be released into the atmosphere, dropping temperatures by an average of well over 20 degrees Fahrenheit worldwide. That would cause crops and vegetation to die which would mean no food for animals or people.