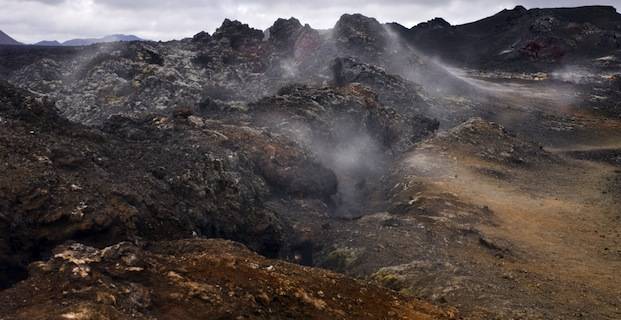 Fissure vent facts. Usually the fissure vents do not involve an explosion.

Fissure vents are a type of volcano in which the lava eruptions through a linear volcanic vent. Usually these eruptions do not involve an explosion. Because fissure vent volcanoes are usually only several meters wide but can range in length up to many kilometers, they are hard to spot when on the ground or from a bird’s eye view because they are mostly flat on the surface with no caldera indicating their location. Instead, they will usually appear to simply be a crack found in the surface of either the ground or ocean floor.

Although fissure vent eruptions are not usually explosive, they can be very large in size and have created large lava fields that have covered many thousands of square miles all over the world including in Ethiopia and Iceland. In Hawaii, several volcanoes have radial fissure vents which will actually create “curtains of fire” when lava fountains erupt on various parts of the fissures.

This type of volcano is usually found on the rift zones or along rifts on the surrounding area. They can frequently be found extending radially away from the volcano’s summit and may even be long enough to reach its base. Although fissure vent volcanoes can be long, the activity within them will sometimes occur at a few specific locations, in some cases causing craters or cones to form.

Shin-dake is the summit crater found on the Kuchinoerabujima Island in Japan. In September of 1980 a brief eruption occurred along the fissure vent on Shin-dake which ejected ash and blocks above the crater up to an altitude of 2 kilometers.

The Pagan volcano is part of the Mariana Islands and during an eruption in 1981, a fissure formed. This fissure goes directly across the volcano’s summit and initially had three principal active vents. The activity of this fissure led to the construction of a cinder cone on its north flank. Vents located on the both the south and north rims of the summit fed lava flows which traveled down the volcano’s flanks.

The Banda Api volcano found in Indonesia is one of the world’s fissure vent volcanoes. In 1988, a fissure on the island that led from north to south-southwest erupted on 9 May, causing both a release of lava and explosive activity along the path of the fissure. The north-side fissure’s vents released large eruption plumes that were full of ash. In addition, the lava flow from the volcano reached the coast, but only after destroying two villages in its path.

Pinatubo is a stratovolcano on Luzon, an island in the Philippines, that erupted in 1991.  The fissure was 1.5 kilometers in length and throughout the course of the eruptions new craters were created. In addition, onlookers could see steam and small amounts of ash rise from the fissure vent. The fissure vent was active from April 2nd until June 15th when the main volcano erupted.

The Krafla volcano is located in Iceland and on September 1984, two eruptive fissures both became active and connected achieving a combined length of 8.5 kilometers. Although at the beginning of the eruption there was volcanic activity along the entire length of the fissure, it later concentrated on the northern part.

Iceland’s volcanic vents usually occur in locations where the lithospheric plates are diverging and later eruptions will generally happen at new fractures that are parallel and thousands of meters from the original ones. The Laki system of fissures actually produced the largest eruption in historical times on the planet when a flood basalt occurred in 934 during the eruption of Eldgja.