Mount Vesuvius is one of the most well-known volcanoes around the world with most of its fame coming from its eruption in 79 A.D. that completely buried the city of Pompeii. The volcano is located in Italy in the Gulf of Naples and is one of the volcanoes making up the Campanian volcanic arc. This volcano is in fact the only volcano located in Europe’s mainland that is active and measures at 1,281 meters tall.

As mentioned above, Mount Vesuvius is one of the volcanoes found in the Campanian volcanic arc. Some of the others volcano also found in this arc are Stromboli, Vulcano, Campi Flegrei (Phlegraean Fields) and Mount Etna. These volcanoes are all part of the same subduction zone which was created by the Eurasian and African tectonic plates converging.

One of the main reasons Mount Vesuvius is so famous is that it is actually one of the first volcanoes to have an eruption described in detail. During the eruption in 79 A.D., Pliny the Younger saw the volcanic eruption from his location in Misenum, around 18 miles away. A short time later, he wrote about what he saw, giving us an early written record of volcanic eruptions. He described the eruption as a large cloud resembling a tree, complete with a trunk and branches of smoke and ash. Pliny the Younger is actually the namesake of the term Plinian which geologists use to describe eruptions that are similar to the one in 79 A.D. in that they are violent and produce a large volume of quickly-expanding gases, ash and rock.

The eruption Pliny the Younger saw occur in 79 A.D. is the famous eruption that completely covered the cities of Pompeii and Herculaneum. Historians estimate that this eruption may have killed over 16,000 people. The main cause of death during this eruption was due to suffocation on the volcanic ash. The most interesting part about this famous Mount Vesuvius eruption is that due to the hot ash in the air, casts were formed which preserved the deceased in great detail. The only hints that the eruption was to come were a few days before when the underground water sources ran dry and a minor earthquake occurred. 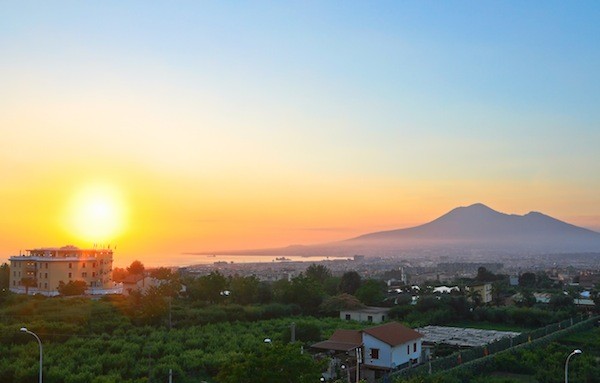 In the previous 17,000 years, Mount Vesuvius has had 8 major eruptions, including the one in 79 A.D. Around 3,780 years ago, the Avellino eruption occurred which not only caught the residents of surrounding areas by surprise but was powerful enough to cause the surrounding area (thousands of miles of it) to become desert for over 200 years.

Immediately after the eruption in 79 A.D., the volcano erupted around every 100 years until 1037, at which point it temporarily stopped. This long period of quiet caused its eruption in 1631 to kill 4,000 people in the area.

More recently Mount Vesuvius erupted on April 7, 1906, the eruption which ejected the highest amount of lava ever to be recorded from this volcano. This eruption killed 100 people and completely changed the plans for the Summer Olympics of 1908. The most recent major eruption occurred on March 18, 1944 and destroyed several nearby villages, killing 26 people.

Mount Vesuvius and its surrounding area is a national park and is open to visitors. There are several paths around it including access to the summit. Despite the imminent eruption, visiting the site should be safe as scientists expect to have warning prior to the next eruption.

Today there are 18 towns found around the base of Mount Vesuvius and together these contain 600,000 people, all living within the red zone. This zone is in the direct line of fire in case an eruption occurs and would see most of the damage.

What Would Happen In An Eruption?

Scientists have measured that Mount Vesuvius currently sits on top of a larger layer of magma that lies deep inside the earth and is 154 square miles, which is a very large amount of magma compared to other volcanoes around the world. In addition, scientists believe that the next eruption, like the one in 79 A.D. will be a Plinian eruption, meaning that it can contain flying ash and rock that reaches speeds of around 100 mph. Because of its proximity to Naples and the large number of people living nearby, an eruption could put over 3 million people at risk.

Due to new technology, the Italian government hopes to have two weeks to 20 days warning before the next eruption, hopefully providing enough time to put their evacuation plan into effect and save all of the people living in the area. Despite this, they are aware of the dangers for the people around the volcano and have offered to pay them to move out of the area, although few people have taken them up on their offer.