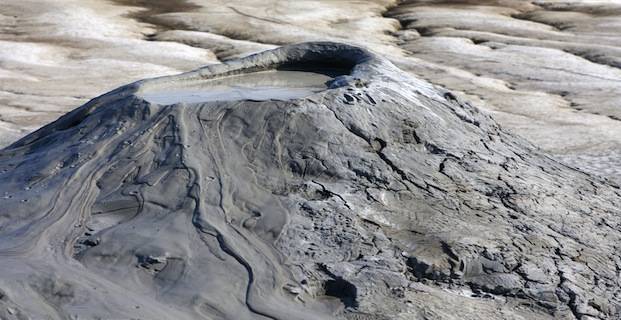 A mud volcano is a formation that was created by any geo-excreted gases and liquids and the formation process can vary slightly. This type of volcano is usually found in subduction zones and around the world, many have been recognized. Most of the gases that are released from a mud volcano are methane although they also release much smaller quantities of nitrogen and carbon dioxide. Generally the ejections from these volcanoes will be fine solids which are suspended in liquids that can include acidic water.

These volcanoes have been identified all around the world including United States, Canada, Taiwan, Italy, Iran, India, Pakistan, Romania, Burma, China, Indonesia, Japan, Colombia and Venezuela just to name a few countries. Most, however, appear in Eastern Azerbaijan. Scientists think there may even be a few on Mars.

As mentioned earlier, it is more likely to find a mud volcano near a subduction zone, but they are also common near petroleum deposits. It is also possible to find them near other types of volcanoes. This type of volcano has a similar shape to other types of volcanoes and contains several cones. The gryphon is cone with steep sides that is shorter in height than 3 meters and will emit mud while the mud cone is less than 10 meters and will emit both rock fragments and mud.

A mud volcano can also contain scoria cones which form when the mud is heated during fires. In general these volcanoes never grow as large as other types as the largest have a height of around 700 meters and a diameter of around 10 kilometers.

As mentioned above, when a mud volcano is by itself, the main gas it emits is usually methane, but in cases when they are located near to other volcanoes they will usually emit incombustible gases such as helium instead. Although most of the material is emitted during eruptions, some seeping can take place even when the volcano is dormant.

There are several different models for the formation of a mud volcano but the easiest to understand is the following. The process begins when decompaction occurs (the opposite of compaction) which will create gases at a high rate. The gases cause the mud to become buoyant and because there is more pressure by the mud than there is outside of the forming mud volcano, the mud leaves the structure via vents or fractures and takes some of the gas with to relieve the pressure.

Azerbaijan has the largest concentration of mud volcanoes with at least 400, 200 of which are within a range of few thousand square kilometers. Some of the volcanoes in this area have created islands, both permanent and temporary, in addition to submarine banks.  Some of the largest of this type of volcano are actually found in Azerbaijan and are Turaghai and Boyuk Khanizadagh. In 2001, a mud volcano only 15 kilometers from Baku, the capital, erupted, shooting flames that reached 49 feet in the air.

One of the most famous mud volcanoes is Lusi located in Indonesia. When this mud volcano first showed activity in May of 2006 it killed 14 people and displaced 25,000. Five years after the eruption began, it was still going on and scientists predicted it would continue for 25 more years. The volcano has continually spewed mud and gases and as of 2001, it had already emitted millions of cubic meters of muddy liquids, reaching an emission up to 180,000 cubic meters of mud per day.

Scientists are unsure what caused the volcano to begin erupting. Some believe that the previous 6.3 earthquake (which occurred 2 days before at 280 kilometers away from the site) triggered it while others believe there was an explosion underground which triggered it.