Where Is The Planet Saturn Found In The Solar System?

Saturn is a planet in the Solar System and the sixth planet from the Sun.  Saturn is actually one of the biggest planets in the Solar System – the second largest planet in fact; and this was named after the Roman god Saturn which was the god of agriculture. Saturn is a gas and giant planet which is nine times the diameter of Earth. – the radius is several times bigger than that of the Earth.  The density isn’t as high as that of Earth and it certainly is an amazing planet.

The interior of the planet and its core is going to be made up from a rock combination of oxygen and silicon, as well as iron and nickel. This core is going to have a deep layer of metallic hydrogen surrounding it with a liquid layer of helium and hydrogen; though there is also a gaseous layer surrounding the core fully. Due to the ammonia crystals in the atmosphere of the planet, there is a yellow hue given out.

Saturn does however, have a ring system. This is going to be made up of 9 different but continuous rings which are the main rings; and there is also 3 other arcs which aren’t continuous in features. These arcs are going to be made mostly of ice particles and some small amounts of dust, rocks and rocky debris. There are however, 62 different moons that are orbiting Saturn, though; there are only 62 known moons that have been found up to date; though there are only 52 moons that have been officially named.  However, these moons are not included with the little moonlets; these are smaller moons which are found deep within the rings of the planet. 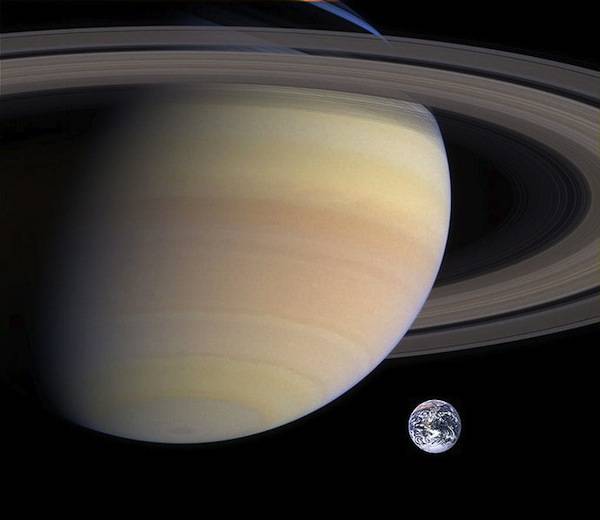 It is known that Saturn is considered to be a gas giant planet; this is because the exterior of the planet is going to be made up mostly of gas. It also doesn’t have a definite surface; however it is thought that the core is a solid core. It can resemble the shape of an oblate spheroid but that is because of how the planet rotates. This is because the equator looks very bulky and the poles very flat; though this does have many things in common with the other thee gas giant planet such as Neptune, Jupiter and Uranus.

Saturn has a density which is lesser than that of water and even though the core of the planet is denser than what water will be, the overall density is very low.  This is because of the gas formed on the planet; though it does have a lot more mass than Earth – 90 times the amount of Earth.

The Internal Structure of Saturn and Atmosphere

Many consider Saturn to be a gas giant, however, it might be made from gas, it’s not entire made from it.  There is a lot of hydrogen, in fact most of the planet is made from this but hydrogen will become a liquid when the density changes on the planet.  The density, temperature and the pressure held within the planet can form towards the core which can make the hydrogen to change into a metal when it reaches the deepest layers of the planet.

The exact internal structure of the planet is not actually well known as yet because no one has been able to study it in full.  It is thought that it has a similar structure like Jupiter which has a small rocky core with helium and hydrogen gas surrounding it; and there are some suggestions that there are some very small trace amounts of various volatiles within the structure of the planet.  The core is probably like Earths but denser.

The interior of the planet is however extremely hot.  It can reach 11,700 °Celsius and can be extremely dangerous also. No one has set foot on the planet and can’t really so it is very difficult to be able to explore the planet in full. There are still a lot of factors about Saturn that is unknown and unexplored.

See also  How to Look at the Solar Eclipse Safely?

The outer atmosphere of Saturn is mostly made up of molecular hydrogen gas – almost 96% with about 3-4 % made up of helium.  There are however some trace elements of acetylene, ethane, phosphine, methane, propane and ammonia – all of which have been found in the atmosphere of the planet. 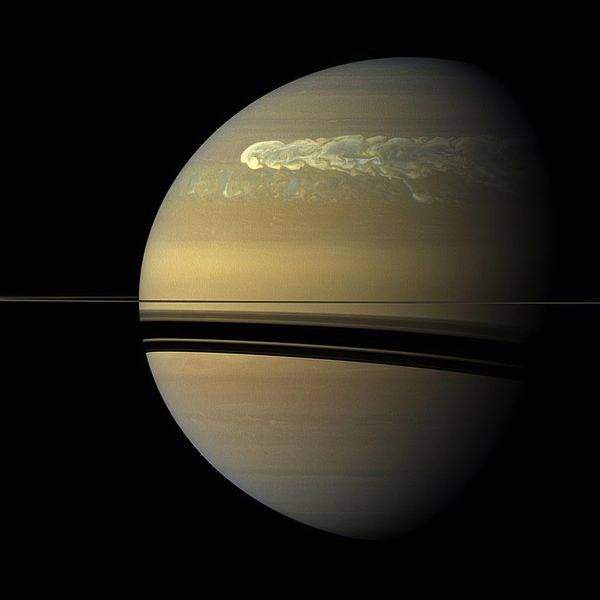 The Orbit System of Saturn and the Planetary Rings

Saturn’s orbit system can take almost 30 years to orbit the Sun.  It takes around 29 years and around 6 or 7 months to orbit and it has very slow speeds of around 9.69 km/s. With the planetary rings, they are the most unique and loved parts of the planet. They are almost 20 meters thick and are made up of almost 93% of water ice. There are some traces of tholin and carbon contained within the rings of Saturn which is around 7%. There are many particles that go into creating the ring sizes, which can range anything from a molecule of dust through to 10 meters in size.

Saturn does have the biggest ring system in the Solar System and they are the most visible also. Some say that the rings were created because of a destroyed moon that was present around Saturn and the rings are remnants of the moon.  However, some experts also say that the rings are found there because material left from the planet.  One thing is for sure, the ice in the central rings of Saturn has come from Enceladus – this is a moon of Saturn.  If this is the case, then the rings are millions of years old.

Saturn can be seen from the Earth but it is the most distant planet to view.  There are only 5 planets which can be seen with the naked eye; however Saturn can only be seen during the night and it will be shown as a yellow and very bright light.  It is said that it take almost 29 and a half years to actually make one circuit which is an extremely lengthy time to take.  Though, to spot this planet, usually it will require a telescope because it’ll be the only way to actually see the rings of Saturn close up clearly.  They are beautiful.