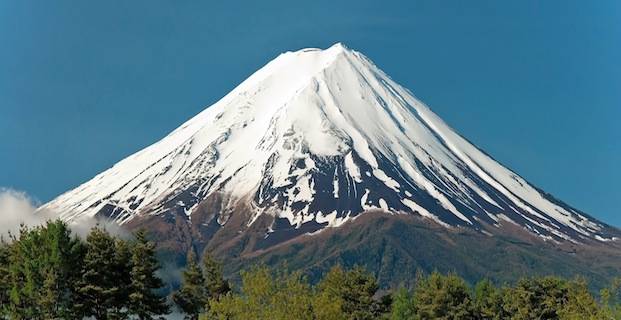 Stratovolcanoes, or composite volcanoes, are similar to cinder cone volcanoes in terms of their shape, but that is one of their few similarities. These volcanoes have gentle lower slopes but much steeper upper slopes, creating an upwardly concave cone and generally have many distinct vents. The summit crater of these volcanoes is usually relatively small.

Despite their general shape, there are some variations within stratovolcanoes due to various composition and types of eruptions. For example some of these volcanoes may have features such as calderas or amphitheaters due to past lateral blasts, such as you can see with Mount St. Helens.

These volcanoes generally take between tens of thousands and several hundred thousand years to form. Most of the stratovolcanoes in the world that are currently active are less than 100,000 years old but some are much older, possibly over a million, such as Mount Rainier.

Stratovolcanoes are one of the most deadly types of volcanoes and their most common type of eruption is Plinian, which is highly explosive and dangerous. These eruptions will generally produce pyroclastic flows containing toxic gases and hot volcanic fragments that move at very fast speeds. Stratovolcanoes can erupt any variety of magma types with levels of basalt, andesite, dacite or rhyolite, but most of the time the lava cools and then hardens before it spreads very far, meaning that they will generally have a narrower base than other types, such as shield volcanoes. Unlike several other types of volcanoes, a stratovolcano usually has a large rest between eruptions.

Nevado Ojos del Salado is the highest volcano on earth. This Chilean stratovolcano rises to 6,887 meters above sea level. Close to it, also in the Chilean Andes, is Llullaillaco which is the tallest volcano to have eruptions in recorded history, measuring 6,739 meters. Nevado Ojos del Salado has a crater lake at around 6,390 meters above sea level, which is one of the highest lakes in the world, if not the highest. Scientists believe that the most recent eruption took place about 1,300 years ago, but are not positive. There is a possibility that the volcano emitted a small bit of ash in 1993 which would make it historically active and the tallest historically active volcano instead of Llullaillaco.

Although Mount St. Helens has the title of one of the youngest stratovolcanoes located in the Cascades, it is the most active. Just within the last 3,500 years, at least 35 layers of tephra have been created by its eruptions. This stratovolcano is most well-known for its eruption in 1980 which killed 57 people in addition to destroying 185 miles of highway, 15 miles of railways, 47 bridges and 250 homes. This eruption was triggered by a 5.1 earthquake and created an avalanche of debris that had a volume of around 0.7 cubic miles.

Mount Rainier is the tallest peak of the Cascade Range and measures in at an elevation of 4,392 meters. Although Mount Rainier itself has developed within the last half a million years, between one and two million years ago there was a similar cone in its place. An eruption that took place 5,600 years ago created a large crater at its top but this was later filled when the summit was rebuilt by later eruptions. Although the most recent magmatic eruption of this stratovolcano took place around 1,000 years ago, it has had several dozen highly explosive eruptions since the previous ice age which have spread tephra all across the state of Washington.

Krakatoa is a volcanic island located that is part of the Sunda Strait. In 1883 this stratovolcano had a series of violent eruptions which sent ash flying more than 50 miles into the atmosphere in addition to being heard at least 2,200 miles away from its location. The large release of energy from its eruption caused tsunamis which in turn took the lives of 36,400 people on Sumatra and Java.

Tambora is an Indonesian stratovolcano that erupted in 1815. In fact, these eruptions were so violently explosive that they are one of the largest in the entirety of recorded history. When the volcano erupted, the global temperatures dropped around three degrees Celsius, which is no surprise as ash was ejected 50 kilometers into the atmosphere. Because the stratovolcano erupted so much material, it caved in after the eruption was complete and in the process created a caldera that is large enough to be visible from space.