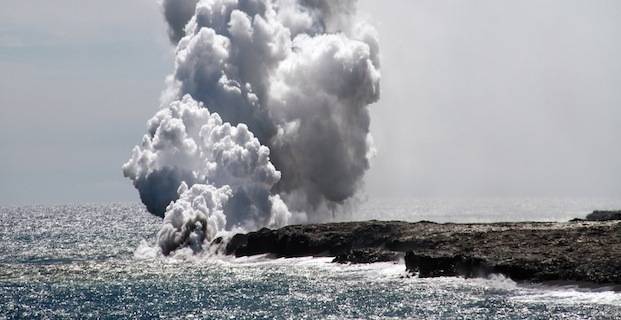 Submarine Volcano Facts. A submarine volcano is different than all of the other types because they are found underwater.

A submarine volcano is different than all of the other types because they are found underwater. These volcanoes are in fact some of the most productive of the volcanic systems, producing around three quarters of the year’s output of magma but most people do not think of them because they are usually located around 8,500 feet underwater on average. Some scientists estimate that in the Pacific Ocean in just a million square kilometers of the ocean floor you will find around 4,000 volcanoes. Like other types, a submarine volcano can vary greatly in height, although it is estimated that around 75,000 of those in the Pacific Ocean rise half a mile over the ocean floor.

Although each submarine volcano is located underwater, it will still produce eruptions while active and the products of these eruptions are what shape the way the sea floor looks. Scientists estimate that out of the million or so of these volcanoes that can be found around the world, many thousands of them are active. Despite this because of their location underwater, it can be hard to catch a submarine volcano in the eruption process. However, scientists do know that most eruptions from these volcanoes will take place in shallow water although recent technological advances have helped scientists document those that take place in deeper water well.

Because a submarine volcano is located underwater, the deposits that are created during the eruption can be very different than those of other types of volcanoes. Volcanologists are actually unsure if an explosive eruption of a submarine volcano is even possible. That is because due to the high pressure created by the water (250 times the atmospheric pressure) bubbles are hard to form in the magma and lava. Because the water will almost instantly quench the lava, the outer surface of volcanic flows becomes glass.

The shape of the flows of a submarine volcano tends to be pillow-like as compared to the blocky flows that are typical of land volcanoes. These pillows are created when the crust of a flow will split causing the lava to ooze out at which point it flows a very short distance and solidifies. The process then repeats with the new piece of lava and ends up creating what seems to be a large stack of pillows. The lava flows can also take other shapes, such as sheet flows and tumuli, which is an inflation feature.

Like all volcanoes, a submarine volcano is associated with a unique volcanic ecosystem. These are usually located by hydrothermal vents, or black smokers, which have been located at all of the mid-ocean ridges around the world. At these vents, hydrogen sulfide and water in addition to other minerals exit these vents, creating an ecosystem of organisms that live using sulfur instead of sunlight. Here you can find tube worms, mussels, giant clams and other organisms.

As mentioned earlier, despite recent advances in technology it is still difficult for scientists to detect the eruption of a submarine volcano. In fact, they have only been capable of detecting them at all since around the year 1990. Long before they were first detected, oceanographers and volcanologists alike were aware that submarine volcano eruptions were occurring but had no way to know where and when. In recent decades, however, they created a new system that measures the small earthquakes that are normally part of magma migration.

Instead of relying on feeling vibrations like they do with earthquakes on land, this system listens for them as the vibrations underwater will produce an acoustic wave. Since this system was created, it has been much easier for scientists to pinpoint the location of these underwater eruptions.