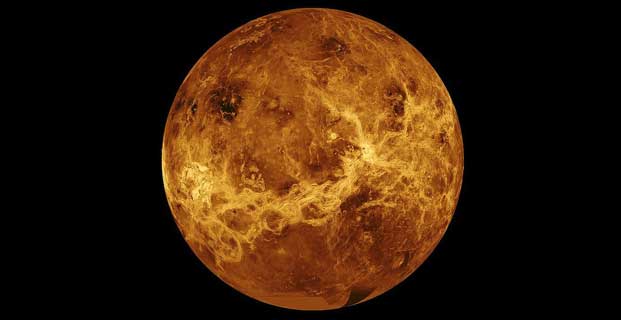 Venus is one of the eight planets found in the Solar System. Venus is the second planet from the Sun. Venus is at its brightest just before sunrise or just after sunset.

The second planet from the sun

Venus is one of the eight planets found in the Solar System. Venus is the second planet from the Sun and can orbit the Earth 224-225 days, so once a year is when the planet does actually orbit the Earth.  When this planet was discovered, it was name because of a goddess from Roman times; named after the Roman God Venus; it symbolizes beauty and love by many still today. It is one of the brightest objects in the night’s sky which is considered to be a natural force.

The planet is at its brightest just before sunrise or just after sunset.  Venus however can be also known as the Evening or Morning Star also in many parts of the world. Though, Venus is a terrestrial planet and is thought to be the Earth’s sister planet. The reason why this is is because Venus is around the same size as Earth; it is big and has the same type of gravity pull and its bulk composition is similar to Earth.

However, in many circles, Venus isn’t really thought to be anything like Earth; the reason why is because the planet has highly reflective clouds which are of sulfuric acid. This helps to prevent the surface of the planet being able to be seen from space with visible light; but the atmosphere is quite dense, compared to the other 3 terrestrial planets.

Venus is considered to be the hottest of all planets in the Solar System and it doesn’t have any carbon cycle which means it won’t have a way to keep the carbon in the surface of the planet.  It doesn’t even have any type of organic life either; and there might have been some oceans present found on the planet but if there were, these oceans are now gone because of the rising temperatures. This is all down to the greenhouse effect that occurs on the planet.  Now, the surface of Venus is going to be very dry and desert like in many ways because it all consists of rocks and can be occasionally refreshed via volcanisms and eruptions causing different changes to the surface. The Physical Characteristics and the Geography of Venus

Being one of the four solar terrestrial planets, Venus will be something similar to Earth because it will have a rocky body.  Its size and mass is again so much like Earth and can be thought of the Earth’s sibling; but the condition on Venus is going to be something certainly different from that on the planet Earth because it’s dense with carbon dioxide in the atmosphere. The planet has almost 97 percent of carbon dioxide with around 3.5 percent being made from nitrogen that creates the atmosphere of Venus.

The surface of the planet was very much unknown until very recently because it was only mapped in detail in 1990-1991. That is not very long ago considering that many of the planets out there are very well known. However, still a lot is left unexplored with Venus though it is known that volcanism movements occur along with there being a lot of sulphur being found in the atmosphere also. This presents evidence that there might have been a lot of eruptions on Venus and this might have happened recently also.

It does have a lot of volcanic plains with this covering almost 70 percent of the planet. There are two highland areas or continents are they can be known as; one of which lies towards the northern part of the planet and the second is near to the equator of the planet. The north continent is named Ishtar Terra and it is thought to be around the size of the country Australia; and has a high mountain of Maxwell Montes. The Aphrodite Terra is located near the equator and is quite bigger than the north continent which is thought to be around the size of South America.

Though, without there being any lava flow evidence seen on any part of the planet, it has baffled many because with there being volcanic activity, most would have believed lava would have occurred. Though, the planet has to be very young because it doesn’t have a lot of crater impacting the surface which could mean the planet is only around a few hundred million years old. The Internal Structure, Climate and Atmosphere of Venus

There is not a lot of direct knowledge about Venus’s internal structure. Most know that Venus is similar to Earth so it may suggest that the two share the same sort of internal structure being created from the core, mantle and crust.  It is known however that the core is somewhat liquid, like the core of Earth.

Though, Venus’s atmosphere is dense – extremely dense because of the high volume of carbon dioxide with a small nitrogen level also. There are some who believe that some part of Venus may be habitable but more research is needed. The planet does however rotate slowly – very slowly which means that the temperatures of the planet are not going to change or vary much.

There are a lot of strong winds and forces that can move around dust, small objects such as stones, all over the planet which can make it difficult for anyone to walk safely across the planet’s surface. Though there are a lot of problems to contend with including the lack of oxygen and pressure and heat changes the planet has.

This could be contributed by from the fact that there might not be any solid inner core or with the fact that the core isn’t cooling down correctly. Though, everyone knows Venus is quite bright, brighter than actually most stars – this doesn’t include the Sun though as this is the hottest and brightest in the Solar System. It isn’t too far from the Sun though it can still only be seen at certain points of the day.

Throughout the years, many have mistaken the planet for an unidentified flying object, and it can at times look very much like an unidentified object. This has been something many have believed including the American President Jimmy Carter!