Hail is something that occurs in most parts of the world. This does cause a lot of damage at times and it can be very troublesome also but what is hail?  Hail is a variety of differently shaped ice balls or lumps. These are mostly referred to hailstones and in most occasions, are not harmful but in some instances, they can be very dangerous.

Hail or hailstones are made up of water ice and can be any size; it can be measured anything from five millimetres and two hundred millimetres. Though, most hail are produced during thunderstorms and heavy rains and aren’t worrying.

How Is Hail Created?

Hail can be created with strong and upward motions of air but a lower freeze level.  Some formations might gather more pressure and create larger balls or lumps of ice water.  In some instances, the hail forms inside the interiors of continents but in climates with higher temperatures such as in the tropics, the formation stays at a high elevation level.

Hail and hailstorms can be created in any continent and can occur in any country around the world, even the countries which have good weather. If this happens, they could be very dangerous when they come down in a rain shower. Though, if they aren’t large, it shouldn’t be anything more than a normal rain shower.

However, many scientists can predict when thunderstorms are going to happen and can detect hailstorms and hail occurring. This can be done through weather radar imagery and satellites used especially for predicting weather and weather changes. When the hail is created and are larger than normal or average size, then they will fall at greater speeds. However, things such as friction with wind and air; and melting and the hail’s interaction with other hailstones and rain can slow down the speeds. 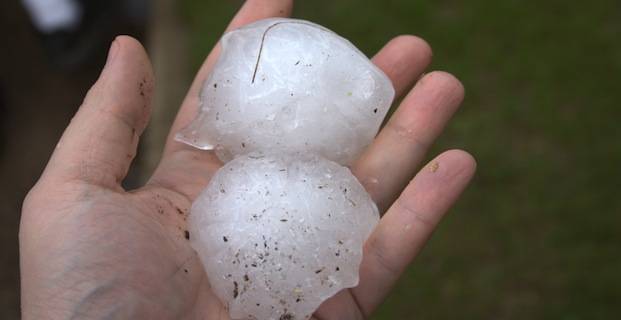 Dangerous road during a hail storm in Greece

Understanding Hail and How It Is Formed

Hail is basically caused during thunderstorms and if hail actually reaches the human population, it is known as hailstorms. However, their size can vary as can its weight because it can be anything up to one pound and over. The worst part of hail is that they have layers and layers of ice water clamped and stuck together and it can be an odd looking size also.

This is basically ice on top of ice; thick layers of ice could be the size of a golf ball or larger.  If the formation is over a certain size then it can cause serious damage to property and human life.  Hailstones can actually be very small and sometimes undetectable but they can be very large in size also and that does mean added weight. The size can vary in terms of how strong the updraft is; and if the hailstorms are weaker then smaller hailstones are going to be formed. Larger or stronger hailstorms are classed as super cells.

The hail is formed in stronger thunderstorm clouds when there is an intense updraft; and the high liquid water content increases. If the cloud is well below freezing then the ice water can be formed. If the air temperature is very cold, more formations of hail will be created.

The Damage That Can Be Inflicted?

Some hailstone sizes can range from pea sized to as big as a nickel.  However, the hailstones can actually cause a lot of damage especially to cars and vehicles, aircrafts, buildings, crops and livestock animals also. More often than not, it is the roofs which take full effects of the hailstorm damage and can cause cracks in buildings and leaks in the roof also.

Most roofs that are made from metal can be resistant to damage from the hailstorms.  However, aircrafts such as planes and helicopters are going to feel most effects of hail damage especially whilst flying.  In fact they can be highly hazardous to aircrafts because the hailstorms can cause a severe amount of damage to aircrafts within only a few moments.

Even on the ground, hailstorms and hail balls are very troublesome to drivers of vehicles because they can reign down on vehicles and cause a lot of damage to roofs, hoods and even come crashing through sunroofs.  Windshields are often the target of hailstones and can crack or shatter them completely. Though, it is not just the vehicles or aircrafts which can be effected by hailstones.  Crops can be damaged also by hailstones.

Hail and hailstorms can cause: 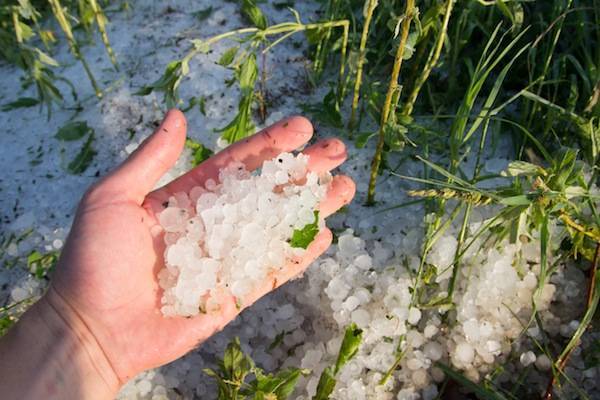 Hailstones from an Austrian region.

The accumulation of hail can be caused because of narrow zone in which the hail forms.  This is on the ground working alongside a thunderstorm and its various activities; this can be called streaks.  However, the accumulation can actually be detected via a satellite but the actual storms do not last for a lengthy period of time.

They last for a good 10-15 minutes and if they reign over land at this time, they will cover the ground and can knock out electricity also.  There have been many instances in which thousands of homes and residents have been left without power.  Hailstorms can also create flash flooding, bring down trees and cause mudslides to happen also.

There are a number of things which could happen when hail builds up and a hailstorm arrives, however, on most occasions, it won’t be anything too serious. However, there can be a lot of things which can occur from hail including flooding due to drains becoming blocked and a build up of hail can turn into something more serious and start flooding populated areas.  It might not always be like this because some floods will not be as bad as some others but again, it will all depend on how furious the hail has become and whether or not, there is a long hail storm.

Throughout the years, there have been many who have been effected by hailstorms.  In some instances, they have even caused fatalities and serious injuries however; many have tried to suppress hailstorms. This is not really possible to do because even though many scientists believe they can predict a weather change, they cannot actually stop a hailstorm from coming.  No one can suppress or prevent a hailstorm approaching and can only take cover in doors when they come.

Of course, some, if not, large percentage of all hailstorms, are not going to cause a lot of damage or be that great in size or weight.  If so, there shouldn’t be any real damage to anyone or anything either.  However, there are some instances where there are going to be a lot of damage.  Hailstorms and hail balls can vary in size and weight.

Hail is a natural disaster and it can prove fatal also.  Many do not believe this or even think about this but it is possible; and that is why it is always wise to be indoors when it a hail storm brews.  In most cases, it will come to nothing but there are going to be some cases in which the hail becomes deadly. Taking shelter when it forms, will be a good idea.