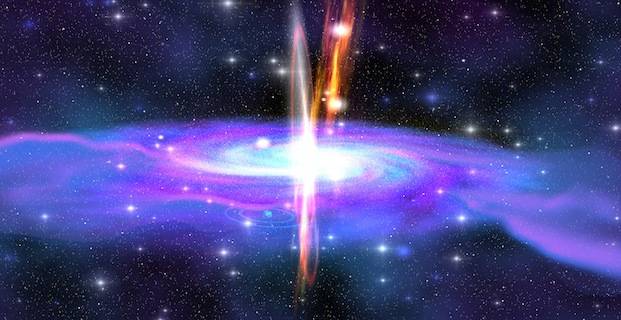 Flashes of gamma-rays which are associated with highly energetic explosions are known as gamma-ray bursts.

Flashes of gamma-rays which are associated with highly energetic explosions are known as gamma-ray bursts. These bursts have been noticed in distant galaxies and are the the brightest electromagnetic events known to man in the universe. These bursts can last anywhere from 10 milliseconds to a few minutes. Usually, a longer-lived “afterglow” follows the first burst, which then comes in longer wavelengths.

The discovery of gamma-rays happened almost by accident. The satellites which detected the rays had been built to detect nuclear weapons testing during the time of the Nuclear Test Ban Treaty. Not sure what was causing the rays that were showing up on the satellites, the team filed the data away. After newer, more sophisticated satellites were launched, more of these rays continued to show up. After analysing the data, it became clear that the gamma-rays were not from nuclear testing or even from solar activity. The findings were published in 1973 in an article titled, “Observations of Gamma-Ray Bursts of Cosmic Origin”.

Even though astronomers and scientists have been studying gamma-rays rays since that time, they are still unable to accurately pinpoint the origin of the gamma-ray explosions. Some suggest they come from outside the Milky Way, but at this time, there is no way to be sure.

Because gamma-ray bursts happen so far away, it’s difficult for astronomers to be sure what exactly causes the bursts. Most are believed to be made up of a narrow beam of intense radiation which is released during a supernova. This is a high-mass star rotating at high speeds, which collapses and forms a black hole, neutron star, or quark star. While it is currently speculation, it’s possible that the entire crust of a star could shatter due to the development of a resonance between the core and crust. This is a result of huge tidal forces which stars experience in the seconds shortly before their collision.

Study of gamma-rays suggest that the blasts are not only extremely far away, but also very energetic and most likely immensely rare.

Unlike nova or supernova, which follow a structure of a bright burst of light which eventually fades out, the light curves of gamma-rays are unpredictable, diverse, and complex. There are no two gamma-ray bursts which are exactly the same. Some bursts have several high peaks, while others have a single peak only. Some show a very weak burst, followed by a very large burst after a short period of inactivity. Some gamma-ray bursts show highly chaotic and irrational profiles with no logical explanation.

—Long gamma-ray ray bursts exceed 2 seconds. Most gamma-ray bursts are in this category. A very long burst—over 2 ½ months long—was tracked, but none that long was seen since.

—Short gamma-ray bursts are less than 2 seconds. It is unclear what causes these short bursts, but since 2005, the afterglow of these short bursts has been able to be studied, giving astronomers more detail on what these little bursts could be.

Right now, there is no danger to earth from gamma-ray bursts. They are much too far away to be of concern, though astronomers are speculating on the possibility of nearer stars colliding and the impact it could have on the earth’s atmosphere. Depending on how far or close it happens, the hypothetical effects would be devastating.