A Tsunami is a series of gigantic water waves that causes a surge of water onto land. These surges can reach heights up to 100 feet. The massive height of the surges can lead to devastating effects when it crashes over land. It can occur in large lakes but mainly occurs in seas.

Here are some terms that are associated with tsunamis:

Tide: The term ‘tide’ refers to the alternate rising and falling of the sea level at shores.

Seismic waves: Seismic waves of energy that travel through the Earth's crust layers or plates, and are a result of an earthquake or a volcano eruption which can lead to causing tsunamis.

Surge: A surge of water is a strong swelling volume of water.

Earthquake: A sudden and violent movement of a portion of the earth’s crust, and the series of vibrations that follow.

Plate: A plate is a section of the earths crust. Plates slide along either beside, over or under each other, causing friction and pressure between the plates.

Teletsunami: A tsunami which causes damage a long distance away from the source has been given the name ‘teletsunami’. These types of tsunamis are not produced by horizontal motions, but by vertical motions in the seabed.

Tsunami waves are caused by large underwater earthquakes where there are tectonic plate boundaries. They can also be caused by volcano eruption under the ocean or lake. Even giant landslides have been known to cause large tidal waves or tsunamis in the past.

Tectonic plates are sections of the earth’s crust that move against each other.

When the pressure of the tectonic plate at the ocean floor releases pressure, it causes the water above to create a series of rolling waves which will build up to cause more turbulent and fast moving waves. These waves will turn into one large wave and will eventually result in a tsunami.

Tsunamis do not appear as a breaking wave. Initially it may resemble a tide that is rising rapidly. Tsunamis generally consist of a series of waves with periods ranging from minutes to hours, arriving in what can be called a "wave train". 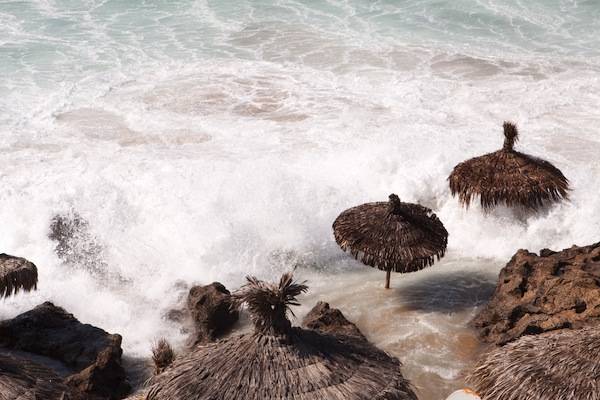 The Pacific Ring of Fire

Almost 80 percent of tsunamis occur within the Pacific Ocean’s ‘Ring of Fire’. This is due to the amount of earthquake and volcanic activity in the area, which occur due to the tectonic shifts in the earth’s plates.

Tsunamis can reach speeds up to 500 miles per hour, racing across the sea. That is about as fast as a jet plane! Tsunamis can travel the entire length of the Pacific Ocean in less than a day. There is virtually no energy lost along the way due to their extremely long wavelengths.

The formation of a Tsunami

When tsunamis begin to form, they only appear a foot of so high in the deep ocean. This makes them impossible to distinguish. The closer they get to the shoreline and enter shallower water, their energy and height grow to drastic measures. The speed and momentum increases due to the top of the waves moving faster that the bottom does.

The lowest point under the wave usually reaches the shore first. When it reaches the shore, it produces what is described as the ‘vacuum effect’, which sucks the coastal water into the sea and gives the opposite effect of a tsunami. When this occurs, the sea floor is left completely waterless and the seafloor is totally exposed. This is the first sign a tsunami is about to hit.

The next stage causes the most serious and devastating effects. About five to ten minutes after the water retreats, the tsunami will hit. This gives people little time to escape the wrath of the tsunami; however the warning can save lives. When a tsunami hits it is important for people to remember that the danger may not have passed with the first wave or two. The aftershock of earthquakes can cause more waves to occur, sometimes even hours after the initial wave hits. The best defense against any tsunami is early warning that allows people to seek higher ground.

Pacific coastal countries are some of the most Tsunami prone areas in the world. Here is a list of some of the countries who have been affected or that could be affected by tsunamis:

Tsunamis can cause great loss of life and a serious decrease in population. Drowning is the most popular cause of death when a tsunami hits. Here are some dangers it can cause to the environment.

One of the most well known and recent incidence of a tsunami was in Indonesia, on the 26th of December 2004. A 9.3 magnitude earthquake triggered a series of giant tsunamis along the coasts of most landmasses that bordered the Indian Ocean. This was also one of the largest earthquakes recorded. It killed over 230,000 people in fourteen different countries. It was recorded as one was one of the worst natural disasters in history. Indonesia was hit the hardest and Sri Lanka, Thailand and India also suffered greatly.

Due to the distances involved, the disastrous tsunami took between fifteen minutes and seven hours to reach the all the different coastlines. The tsunami took seven hours to hit Somalia. Sumatra, and Indonesian island was hit very quickly especially in the northern regions. The east coast of India and Sri Lanka were hit somewhere between 90 minutes to two and a half hours later. Thailand was hit around two hours later despite the fact that it was closer to the epicentre The reason for this is because the water was more shallow in the Andaman Sea, which is off the western coast.

The earthquake which caused the tsunami affected many countries even beyond Southeast Asia. These other countries included Sri Lanka, India, Malaysia, Thailand, Myanmar, the Maldives, Seychelles, Somalia, Tanzania and South Africa. Australia and Europe had a large number of their citizens in the region at the time of the disaster, along with many other countries. There were 543 Swedish people and 539 German people lost in the disaster.