What is a Hurricane?

Hurricanes can be described as giant, swirling storms. They are severe ‘tropical storms’ and are usually accompanied by treacherous thunderstorms. These monster storms can reach winds speeds up to 160 miles per hour. They can also unleash a whopping 2.4 trillion gallons of rain a day.

Hurricanes occur in the Caribbean Sea, Eastern Pacific Ocean, Southern Atlantic Ocean and in the Gulf of Mexico.

These same ‘tropical storms’ are known as ‘cyclones’ in the northern Indian Ocean and Bay of Bengal, and similar storms are known as ‘typhoons’ in the western Pacific Ocean. These storms may have different names, but they all have similar and devastating effects.

A tropical depression is an occurrence which consists of clouds and thunderstorms joining together. A tropical depression can have wind speeds up to 39 mph. This is the maximum wind speed that is expected from a tropical depression. It has no eye and does not typically have the organization or the spiral shape of more powerful storms. It’s pressure is lower than more serious storms, and this is why it is given the name "depression".

A tropical storm is a group of heavy thunderstorms with a specific surface circulation and greatest constant winds between 39 - 74 mph. During this point, the typical cyclonic shape starts to develop, though an eye is not always present. The Government weather services assign names to the cyclone that reaches this intensity and strength.

A hurricane or typhoon system involved sustained winds that reach at least 34 meters per second or 74 miles per hour. A hurricane can be sometimes referred to as a tropical cyclone, as opposed to a depression or storm. The eye of the storm is actually the calmest part of the storm, and is at this point the pressure is at its lowest. The eye can be observed from satellite images. These images look like small, circular shaped spots that have no clouds. The area that is called the eye wall surrounds the eye of the storm. The size of the area is between 16 -80 kilometers wide. In the eye wall the winds and thunderstorms are the strongest and cause the greatest amount of damage. The strongest winds sustained in recorded tropical cyclones have been measured at 195 miles an hour or 85 meters a second.

Tropical cyclone seen from the space

Where and when hurricanes occur

Areas that are subjected to, and regularly experience hurricanes are all the Atlantic and Gulf of Mexico coastal areas. Parts of the Southwest United States and Pacific Coast also experience heavy rains, storms and floods each year as results of hurricanes that hit Mexico.

The Atlantic hurricane season starts in the month of June and ends in November. Mid August to early October is considered as the peak seasons for hurricanes. The Eastern Pacific hurricane starts and ends around May 15 - November 30.

Hurricanes start off in the warm ocean waters as tropical disturbances. The temperature of these waters would be around 80 degrees Fahrenheit. The pressure from these systems produces energy from the warm water. A storm is termed a ‘tropical depression’ as it achieves wind speeds of 38 miles per hour. (61 kilometers per hour).

The scale is used to measure the strength and intensity of a hurricane. It ranges from one-five rating. The scale is used to give an accurate estimation of the flooding and property damages expected down the coast from the storm. Wind speed is the determining factor in the scale.

Hurricanes can be described as giant heat engines that produce large scale energy. They draw heat from warm ocean air and release it through condensation of water vapor during thunderstorms.

The low pressure centre which the hurricane spins around is known as the ‘eye’, or the ‘eye of the storm’. Sinking air makes this 20 to 30-mile-wide area notoriously calm.

The dangers of hurricanes

The major fear we have on hurricanes is its capability to cause catastrophic damages to not just the coastlines but to several miles inland. Today’s stats show that hurricanes are capable of producing winds exceeding 155 mph (miles per hour).These high winds are so powerful and destructive that they can pull entire buildings, boats and farms out of the ground and relocate them to several miles away from where they were originally found.

Apart from it, hurricanes are also able to create and form heavy storm around the coastal areas that can cause heavy damage due to heavy rainfall. The most destructive results of hurricanes are the floods and flying debris from the extreme winds. It’s the slow moving hurricanes that produce heavy rains especially moving to mountainous regions which results in mudslides and landslides. Nonstop heavy rainfall can also causes flash flooding.

On land, the heavy winds can cause catastrophic disasters and most of the time even destroys vehicles, bridges, buildings, barns and other outdoor structures. The winds can turn debris into deadly objects in a matter of seconds.

The storm surge in sea levels increases to causes problems due to the tropical cyclone, which are typically the worst effect from land falling. It has been recorded that these effects result in 90% of tropical cyclone deaths. The wide rotation of the land falling tropical cyclones and wind forms tornadoes. Tornadoes can also be produced as a result of eye wall vortex, which can persist until landfall. 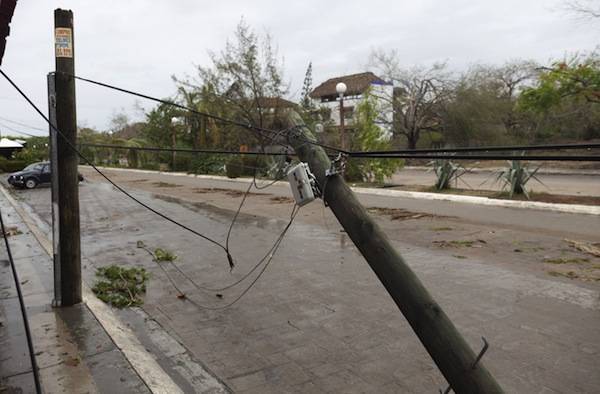 Over the past two hundred years, these tropical cyclones have been held responsible for causing the deaths of around 1.9 million people worldwide. Large undrained areas had large amounts of water caused by flooding. This results to form infection in many people and contributed to mosquito-borne illnesses. Crowded evacuation shelters increase the risk of disease spreading. Tropical cyclones can had negative effects infrastructure and sometimes they cannot be fixed quickly. This can lead to power cuts, bridge destruction, and can make reconstruction efforts very difficult.

Although cyclones take an enormous toll on human lives and public and personal property, they may have very important effects on the water regimes of locations that they occur in. This is because they transport the very necessary water to drier regions. Tropical cyclones can also play a part in global warming. They help maintain the global heat balance by the warm and damp air being moved to the middle latitudes and Polar Regions. The cyclones also help keep the heat balance maintained by regulating the thermohaline circulation. The hurricanes strong winds and storm surge are usually destructive to human-made structures, but they also affect the water in important fish breeding areas. In fact, it is popular that due to the destruction that the tropical cyclones cause, the local property values increase and will result in development.

A U.S. Geographical Laboratory has run tests to determine the effects of global warming on hurricanes. Their studies and research conclude that there are high possibilities of extreme and intense hurricanes to occur in the next century since the climate is warmed due to the increase in greenhouse gases in our atmosphere.