Ocean currents are continuous and directed movements of water produced by multiple factors. Currents can happen in rivers, lakes, swamps and other water systems, although in the oceans, because of their size, a higher number and stronger currents exist.

These ocean currents flow over long distances and sometimes significantly influence life on Earth. What changes their direction and strength? The topography of the seabed, their interaction with other currents, and the configurations of the shorelines.

The effect of several factors acting over the water that generates currents like the wind, the rotation of the Earth, the gravitational force of the moon, differences in temperature and salinity, the topography (shape) of the seabed, the heat from the sun, etc. Let's review the three most important factors that generate currents:

1. Wind.
Drives currents that are near or on the water surface. Seasonal winds push surface waters away from the coast, so the water rises in the western edges of continents.

2. Tides.
Tides, created as the result of the gravitational pull of the moon and the sun, create currents near the coasts, bays, and estuaries. Their pattern is regular. Therefore changes are predictable.

3. Thermohaline Circulation.
Density differences, due to salinity and water temperature differences, drive this flow. It causes the bottom topography influence on deep currents. 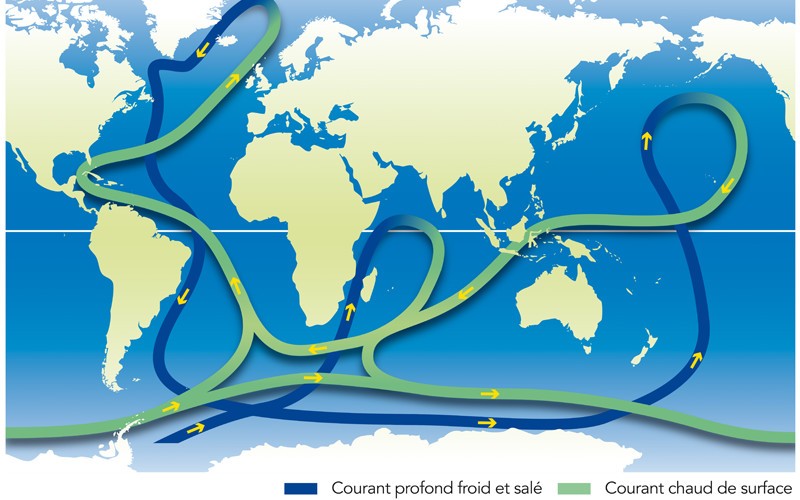 Surface currents can be of two types:
1. Warm, ranging from the tropics to high latitudes and
2. Cold, originating in polar and temperate latitudes and flow toward the equator.

When several ocean currents are connected, they form the so-called gyres, in which water moves in a circular pattern while maintaining the clockwise motion in the northern hemisphere and the opposite in the southern hemisphere.

Deep Currents.
Also called submarine rivers; they flow at more than 100 meters deep and move because density differences about salinity and temperature.

Coastal Currents.
The wind blowing along the coast affects the waves and these, in turn, the currents.

Tidal Currents.
They are the result of the high tides and the low tides. When tides close to the shore move vertically, up or down, they move water horizontally, creating currents. These are the only type of currents generated by the gravitational attraction between the sun, Earth, and moon.

Ocean currents affect the regional climates, marine life, and the cycle of nutrients in the water.

The importance of Ocean Currents.

Ocean currents affect the regional climates, marine life, and the cycle of nutrients in the water. In this regard, the transport of nutrients promotes the prosperity of many species of plants and marine animals, and sediment transport or harmful particles in the surface currents gives an overview of the effects of pollution and its causes.

Moreover, the preparation of navigation by observing the direction of the currents ensures safe travels. In the case of shipwreck, rescuers can determine the location of the missing persons.

It is also important to note that the currents generate high temperatures in parts of Western Europe and promote plant and animal life in Antarctic waters.