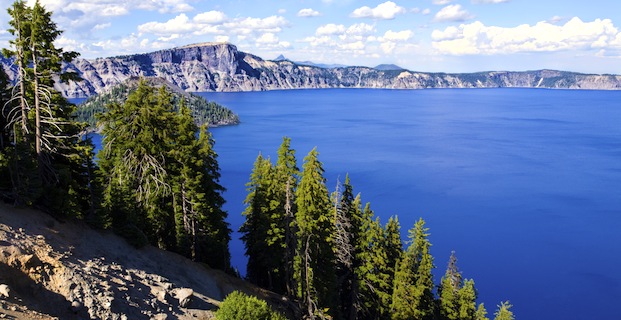 The remains of Mount Mazama

The Crater Lake National Park is an amazing American National Park found in Oregon. This was first established in 1902; the park is the 5th oldest in America for national parks. The Crater Lake is the only national park that is found in the America State of Oregon and the park includes the remains of volcano which was destroyed, Mount Mazama; the caldera as well as hills and forests surround the park. It is a beautiful sight to view.

Crater Lake is in fact 1,943 feet or 592 meters deep. This is at its deepest point; and it does mean the lake is the deepest found in the United States of America today. In North America, this is the second deepest lake and the 9th in the world. When this lake is compared to others in the western hemisphere, Crater Lake is the deepest and it really is a stunning lake to view.

It is said that the depth of the lake is due to volcanic activity. In fact, this is a volcanic lake; and this is because of the deep caldera which was formed thousands of years ago when there was a violent eruption. The lake was also formed because of the collapse of Mount Mazama also; and with a moist climate it does help to create a very deep lake bed.

The caldera rim’s elevation ranges from seven thousand feet to eight thousand feet and there are almost 183, 225 acres of land of the park also. There are no rivers or streams that flow into or out of Crater Lake and all of the water that enters the lake will be lost due to subsurface seepage or evaporation. Though, one of the most notable features of the lake has to be its very striking blue hue. Panorama during the winter

There is a large amount of volcanic activity in the area of Crater Lake and this is due to the fact that there is sub-duction coming from off the coast of Oregon. This is because the Juan De Fuca Tectonic Plate slips underneath the North American Tectonic Plate; compression and heat is generated from the movements of the tectonic plates and can create a mountain chain which is topped with many volcanoes – this creates the Cascade Range.

The larger volcanoes are called the High Cascades; and there are a lot of different volcanoes to view in the range also. Some of the other volcanoes are small and some can be large also. 400,000 years ago, Mount Mazama was formed and over time, the over lapping shield volcanoes produced lava flows and steadily grew the range until it reached 11,000 feet.

Over the years, more volcanic events took place and vents were created also; these cinder cones can erode easily and most of the early ones are gone completely. There are a good 13 or so young cinder cones that are in the park as well as 11 others which are outside of the borders of the park. They do still all have their unique and very distinctive cinder cone appearances to them also.

For many years, Mount Mazama was actually dormant but it did become active again. However, in 5700 BC, Mazama once more erupted, this time it was an awful and very large. During the eruption, Mazama collapsed in to itself and almost 3,500 feet was lost of its height; and a large caldera was formed. However, this created a massive and very beautiful lake which was filled within 740 years. This has a beautiful blue hue and that formed Crater Lake.

Ash from the eruption stretched far and wide especially in the east and North West of the area. It covered the area of what was of Yellowstone National Park; and it stretched to the areas of what is now British Columbia and Nevada also.

Snow is found in the Crater Lake National Park but the levels is not that high and usually it is found at higher elevations. At lower elevations, snow can be rare at times. In the winter season – usually between September through until June, brings a good 98 days of considerable snow fall. There have been times, such as in 1937, 1951 and 1971 in which almost 37 inches of snow which have fallen in one day. In one month alone, there were more than 313 inches of snow produced that fell over the Crater Lake National Park region. There are usually a good 10-15 feet of snow which is accumulated in the park during early spring. Through spring, the park roads; or at least most of these roads are going to be kept closed. There are times in which the snow can be seen during the summer and can be left there until the temperatures reach higher levels. In July and august, snow is rare and usually one great day follows another.

From 1962 and 1990, the lowest was minus 29 degrees Celsius and the highest was 32 degrees Celsius. The average rain fall is usually around 66 inches each year and usually in December, 11 inches of rain falls which makes it the wettest month in the entire year. There is an average snow fall of 533 inches each year; this usually covers the eight month period in which the worse of the weather appears.

At times Crater Lake can freeze over but this rarely happens today.