Arches National Park is found in eastern Utah in the United States of America. It’s an American National Park and it is famous for being able to preserve almost 2000 sandstone arches which are all nature. The park can stretch over 76, 600 acres and has many amazing scenery and sights to admire. Though, the park has seen its fair share of arch loss as around 42-43 has been damaged and worn away because of erosion.

Arches national park wasn’t actually considered to be a national park until 1971; on the 12th of November to be exact. The formation of the arches are because of the ground in which the park sits on. It is on a salt bed and this causes the different formation of the arches to occur though erosion has become recently common, certainly within the past thirty years or so. The area in which the park covers is massive and there are so many beautiful scenery to see and no matter how often someone visits, they will never forget their time there. It’s very beautiful.

Activities in the Arches National Park

The park is however quite famed for its ability to bring in a lot of astronomers. The reason why this is, is due to the fact that the park has a lot of darker skies; even though there is a lot of pollution of light coming from nearby towns. When the park is overshadowed by these darker skies, they can be very intense but amazing to witness first hand.

For many years now, there have been many off road enthusiasts, mountain bikers and hikers which love to come to the park. Some activities are going to e limited in the park itself as there are specially marked roads for vehicles to use and camping areas and hiking trails to be used. Visitors really can’t go off on their own exploring the park thoroughly because there are many areas which are considered unsafe especially if you get lost, hurt and no one knows where you are. 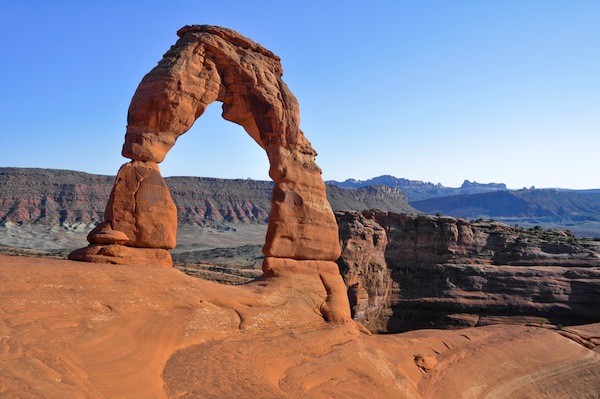 That is why the designated trails are used so that if anyone should be hurt, they can be found quickly and receive the help they need also. It might not sound very fun to have to stick to the rules but they are there for the visitor’s safety as well as keeping the park undisturbed also. Anyone can tour the park or go backpacking or even camp in the park but sometimes, special permits are going to be needed. There is a lovely range of guided tours and ranger programs to use for larger groups or parties attending.

There are going to be many different species of wild life as well as plant life that litter and in fact dominate throughout the park. Here are some of those species;

Many Different Varieties Of The Red Fox

Varieties Of The Sparrows

The Features of the Park

The park is home to many great features and talking points including;

The devils garden – this is sometimes referred to the Klondike Bluffs. This is because there are many amazing columns and arches across a ridge. In a way, they are almost scattered across the ridge which makes them quite unique but they are a breathtaking sight.

The wall arch. This can be found near the Devils Garden Trail but in 2008, between August 4th and 5th, it partially collapsed. This shouldn’t take anything away from the fact that it is still a great place to visit as the scenery is beautiful. 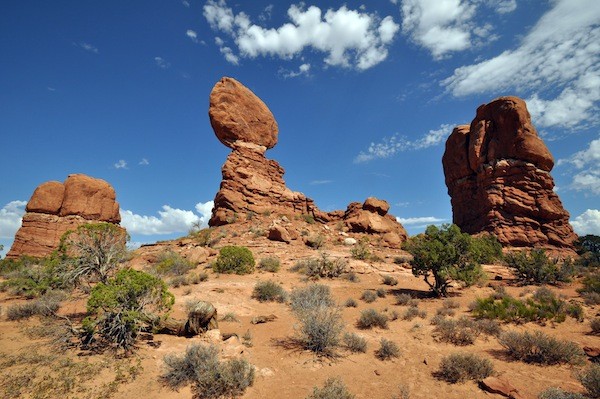 The Double Arch. This is a lovely sight to visit also because there are two large arches and they do look amazing.

The Balanced Rock. The Balanced Rock is quite a sight; this is because there is a huge rock that is around three bus lengths, balances. It might not seem much on paper but when you see it up close and personal, it is great.

The Fiery Furnace is also a great place to stop at. This is something like a maze with its maze like passages; they are quite narrow and are also very tall columns which stand over the Furnace.

The Courthouse Towers. These are a large collection really of stone columns which are very tall. They do make a great photo op for anyone who wants to take a picture to remind themselves of what is there.

The Petrified Dunes. These are made of up the old sand dunes which used to be present in the park; these have actually created remains of the dunes that used to once stand there.

The Dark Angel can be found at the end of the Devils Garden Trail. This is almost a 46 meters (or 150 feet) free standing sandstone pillar. It is a fantastic sight to see and certainly one of the popular attractions for the tourists to visit.

The Landscape Arch. This is a long arch that reaches almost 88 meters (or 290 feet) off the ground. This is a wonderful sight to see and one popular attraction.