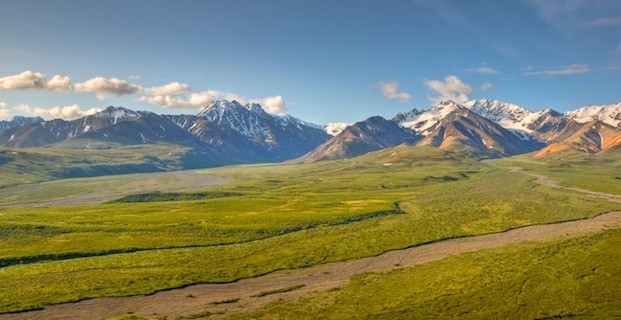 The Denali National Park and Preserve can be found in Alaska. Inside the park, Mount McKinley which is the biggest or rather, the largest mountain in North America today. The park covers almost six million acres of land and of that land; over four million acres are owned by the government. Almost one million acres of land are of the national preserve and most federally owned also. However, in 1980, on the 2nd of December, over two million acres were established as the Denali Wilderness land.

There is a mix of habitats including the low elevations forest which home the deciduous taiga; and the tundra which are found at higher levels; and there is of course snow, glaciers and rocks found in the park also. Kahiltna Glacier is the longest glacier in the park today and there are almost half a million visitors that come here each year. Some of the most popular things to do in the park are:

The central region of the Alaska Range are actually found in the Denali Park; and along with the range, there are a lot of different glacial valleys and glaciers in the park. In the north region of the park, visitors can find the valleys of Foraker River, McKinley and Toklat also; and there is the Wyoming Hills and Kantishna Hills. In the park hunting is also prohibited and restricted. During the cold weather, usually from the winter months, almost 80 % of the bird population will migrate. These birds will return once the cold weather is over to raise their young; and a lot of mammals in the park will use the summer months in order to prepare for the colder months. During the summer months, the days will usually be damp but cool; and some of the temperatures can reach around 70 F. The weather however can be very unpredictable at times as there have been some hints of snowfall during the month of August!

To the north of the Alaskan Range, the climate is going to be very different. The moisture from the south of the mountain can’t reach the north and as a result, the water is blocked which helps to offer a dry climate. The temperatures of the mountain will vary however in the north; whereas in the south, the moisture in the air adds to cool summers and warm winters.

The park is home to at least four hundred and fifty different types of plant species found in Denali National Park including:

There are many different species of animals found in the park including:

The salmon, arctic grayling and trout fish can be found in the many waters throughout the park. Though the cold temperatures are going to allow the lakes to be fed by the glaciers; this prevents the fish from having a fast metabolism meaning they don’t reach their normal size quickly. Denali national park is very well known for the bird population; as many birds migrate here during spring and summer. Birds such as:

The park’s rangers try to continuously ensure the wild life is kept wild life and keep the interaction between the animals and humans to a bare minimum. This is because the park rangers don’t want the animals to become dependent on humans to bring them food or become a food source for the animals also. Some of the wild bears do wear tracking collars so that the rangers can keep a close eye over their movements however these collars don’t hurt or harm the bears in any way.

No one is supposed to feed any of the bears or in fact any animal in the park – this is not allowed in any terms! The reason why is because the animal’s feeding habits can be effected by this and since these are wild life animals, the park doesn’t want to disturb their routines.

All visitors should view the animals from a safe distance; and the number of dangerous encounters with the bears and humans has been reduced also. This is because there have been better prevention methods added so that both the humans and bears are kept safe.

However in 2012, in the month of august, the Denali National Park had its first fatal bear attack. A lone hiker may have startled one grizzly bear which is thought to have been a very large and male bear. Apparently the hiker photographed the bear in which provoked the attack – this could have been due to the flash of the camera – and it was said the hiker made a mistake. He may have violated the park regulations about back country bear encounters – all permit holders should know these regulations before setting off.

At times, some of the park can be closed off; this is due to the activity of the wild life in that area. This could be dens set up by bears or wolves and it can be very dangerous which is why occasionally, an area or two will be closed to the public. However, the park is a beautiful location and it is a premier location for anyone who loves to see amazing wild life scenery. This is a fantastic area, certainly one of the most magnificent areas in Alaska and indeed the world.