Located in Utah, Bryce Canyon National Park is a lovely national Park. The American national park plays host to some amazing scenery including Bryce Canyon. However, despite it being named Bryce Canyon, there isn’t any canyon! Instead, Bryce Canyon is a huge collect of natural and very large amphitheatres. These can be found towards the Paunsaugunt Plateau, to the east of this and the national park is actually very distinctive.

The park’s geological structure is very unique to help identify the park; these structures are called hoodoos which have been formed because of the weather – particularly the frosty weather. Also, the stream erosion from the lake and river bed of sedimentary rocks has caused the national park to be distinctive and easy identified.

The rocks are a great orange, red and at times white in colour but they do look amazing for those who notice these. It was the Mormon pioneers in which took home at Bryce canyon and that was back in 1850; the park was named after the settler, Ebenezer Bryce. He created his homestead in 1874 and the park was to become a national monument in 1923 and five years later in 1928, the park was named a national park.

The area in which the park covers measures up to around thirty five thousand, eight hundred and thirty five acres of land; however, there is a problem with the park. It does not get as many visitors as what Zion National Park does which is very close to it. This might be because of the fact that the Bryce national park is somewhat remote. 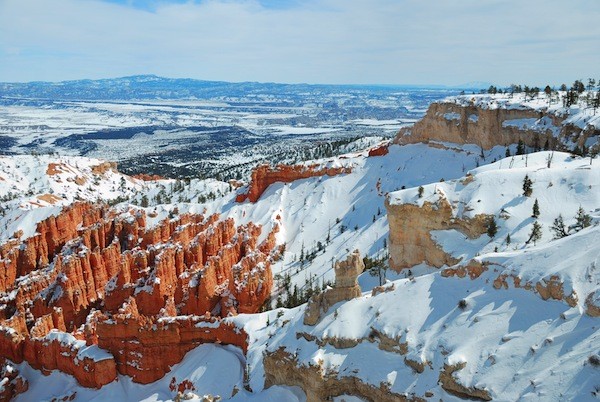 Bryce Canyon with snow in winter

The Climate and Geography of Bryce National Park

Technically, Bryce canyon is not in fact a canyon because it wasn’t formed from erosion that came from a central stream.

A lot of the visitors love to go sightseeing using the scenic drive option. This is going to allow the visitors to view many amazing viewpoints across the park – 13 to be exact. There are more than 8 marked hiking trails; most of them can be completed within a day some less than an hour. Though it will all depend on which trail is used as some stretch a small distance and some longer distances also.

There are 2 very good designated trails for those who wish to go overnight hiking. There is the Under the Rim Trail and the Riggs Spring Loop Trail also; but for those using these, a permit for back country camping is required.

There are over 10 miles of amazing marked skiing trails to choose from, though there are also unmarked trails to use near Fairyland, Paria so visitors have a huge choice to choose from. There are more than 20 miles of amazing connecting ski trails to use at Ruby’s Inn and Dixie National Forest. What is more, the air there is very clean and clear; and visitors will be able to see Kaibab Plateau and Navajo Mountain from Rainbow point. Sometimes, the Black Mesas in Arizona and even New Mexico can be seen when the air is clear!

Bryce has an amazing sky view during the day and at night! In fact, the park has one of the darkest skies in America today. That is why this is a very popular area for those who wish to star gaze! Over 7000 different stars can be seen just with the naked eye so it certainly will be an area in which is very popular today for many people and it can be a very romantic sight for couples also.

The park rangers actually hold a public star gazing event, several in fact, throughout the year and host programs during the evening. These programs are all about nocturnal animals, astronomy and of course night sky protection. 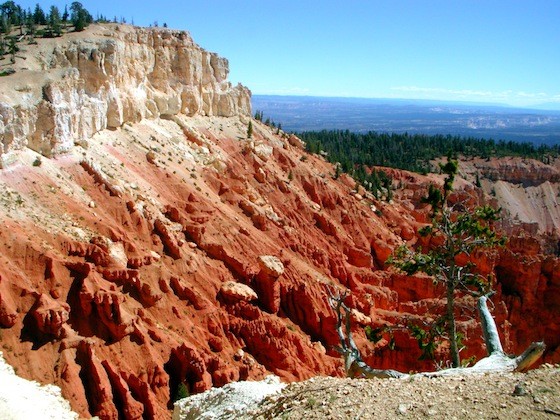 Every year there is a festival, the Bryce Canyon Astronomy Festival, this is usually help in the month of June and this brings thousands of visits. This is an amazing festival however and Asteroid 49272 was named after the park also.

The Bryce Canyon Lodge is another ground lodging to stop over at. This has 114 rooms available and it is a lovely place to stay when it comes to camping over in the park. Though there are a lot of different options to choose from. One of the most popular activities for visitors is going to be to view the landscape at sunset because as the sun is setting, the views can be spectacular. Snapping a few photographs will be an amazing experience.

Bryce national park might seem to be fairly remote but the area is still one of the very best national parks today. It certainly is a lovely national park to visit and there is plenty of culture and history to view also. With skiing, hiking, camping and a lot of amazing scenery to view, this is a beautiful park to explore today for anyone.