There is a huge land area of almost 790, 000 – 790,640 acres which is just around the same size of the State of Rhode Island – in fact, it’s just a little bigger. Though, there is a large part of the park which is exclusively wilderness. It is thought that the rocks throughout the park, were formed around 100 million years ago; this is because of the magma beneath the surface was cooled.

Activities In the Park

There are 9 camp grounds in the park including:

For those who are going to want to use any of the three camp grounds from above, they are going to have running water and flushable toilets. However, there might be a fee charged a night for those who are using the camping area. Most of the other camp grounds are based on a first come first service policy; and back country camping is something which is very popular today. There are some regulations when it comes to using the grounds however so visitors need to check them before using the trails. The park is in fact one of the worst areas for air quality in America today.

Visitors can also go hiking in the park. There are many good hiking trails to choose from and there are longer and shorter trails to choose from; a trail through the Hidden Valley is short, only 1 mile. However this is going to offer visitors a great opportunity to see the amazing scenery of the park. There is a lookout point at Keys View which faces the south area of the park; here visitors can see the amazing views of Salton Sea and Coachella Valley also. 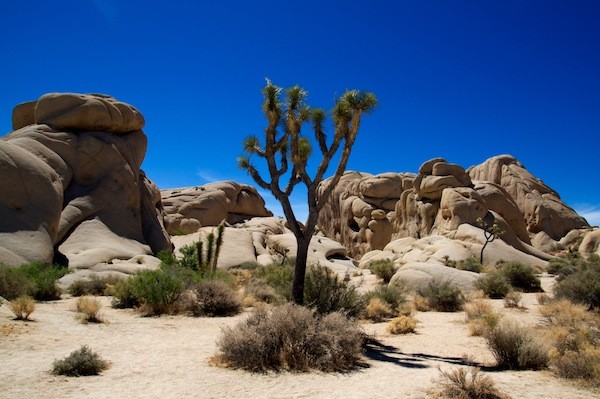 In the park today, there are almost 250 different types of species found. This is going to include the ever popular birds including:

Some species however only spend a short amount of time in the park; some spend 2 seasons there before moving on. However, for anyone who wishes to find animals or sight them, will be able to visit the Smith Water Canyon or the fan palm oases. For those who wish to see birds, the Lost Horse Valley and the Queen Valley are both very popular areas to visit.

However, the park is very popular when it comes to astronomy and for star gazing also. Since the park is very well known for the dark skies which are usually found within the park, it is going to bring in many who want to explore the night’s sky. Though, the skies are really very much undisturbed by the air pollution found in California. The park has dry desert type air and does have a good stable atmosphere; this helps to create great astronomy conditions for observing the night skies.

The Wildlife in the Park

For the animals that live in and around the Joshua Trees, they do have ways to adapt. They have their very own special ways to adapt when it comes to having limited water supplies as well as some of the high summer temperatures. Most of the smaller mammals and the reptiles in the park usually find there is a huge heat coming from the underground but these animals do take refuge away from the heat amongst the trees.

Barker Dam is one of the best places to find the wild life; and the Barker Dam is actually a very short hike to the Hidden Valley. For visitors they will be able to see the Mule Deers and Desert Bighorn sheep passing through there to stop for water. There are tours of the area available at times for the visitors.

There are different types of wild life found in the park including:

The Wilderness Of The Park

With the park’s 789,745 acres of land, almost 430,000 acres are going to be designated as wilderness parts. The land is maintained by the NPS – the National Park Service. For any visitor who wishes to stay overnight to camp at the camp grounds, it will mean they need to register with the NPS. There cannot be any open camp fires used or stoves used other and there is a leave no trace element to the park. No bicycles are allowed in the park but horses are when there is a permit.

The park is certainly going to be a great area to visit also.