You are probably already aware that water covers about 97 percent of the entire planet, right? Then maybe you’re familiar with the concept of the water cycle, a necessary process for life on Earth. However, you should know that the water cycle is more complicated than you think, and there are 15 components or elements in the process.

Water is never still. We’re not just talking about currents or tides, but also changes in their physical state: gaseous, liquid, and solid. The hydrological process is the process in which water moves in, on, and under the surface of the Earth, over and over again. Although it sounds simple, it forms the basis of the existence of living beings, as they use it for drinking and therefore, survival.

The Process of the Water Cycle.

We can’t say when and were the hydrological cycle begins because it never stops. However, you can take the oceans as a starting point for understanding the process.

Although usually a smaller number of steps are mentioned, there are about 15 steps or components in the water cycle:

1. Water stored in the oceans.

Most of the world’s water is in the oceans and a small percentage in glaciers and smaller bodies of water: rivers, lakes, ponds, etc. Oceans are therefore a kind of warehouse for a large quantity of the vital liquid and supply nearly 90% of the evaporate water that is part of the water cycle.

It is a process that converts liquid water into gas or vapor, mainly due to solar radiation. This energy from the sun is essential for water to evaporate, which happens when it reaches 100°C, its boiling point.

At this stage, evaporated water joins with the transpiration of plants, so together the process is often referred to as evapotranspiration. Oceans, seas, rivers, and lakes provide nearly 90% of the moisture that evaporates, while plants provide the other 10%. In concrete terms, this state is characterized by the transformation of water into steam in the air.

The hydrological process is the process in which water moves in, on, and under the surface of the Earth, over and over again.

3. Water in the atmosphere.

At this point, the water in vapor form is contained in the atmosphere. The amount of water is still small. Imagine, if all the water in this layer of gas fell to Earth as rain, it would cover the ground with only 2.5 centimeters of water.

Water vapor in the atmosphere becomes drops of liquid water. This process creates clouds and fog, and it is the opposite of evaporation.
How does this happen? Well, the water molecules combine with dust, salt, and smoke and form tiny drops that grow and join to develop clouds; this only occurs at high altitude where there is cooler air which allows this process.

The condensed water vapor falls to Earth’s surface as rain, snow, hail, sleet, fog drip, and snow pellets but most of the water from the clouds returns in the form of rain. All these kinds of precipitation happen due to the collision of the particles in water vapor clouds; it takes millions of cloud droplets to produce one raindrop.

6. Water stored in ice and snow.

The water cycle is not exactly a progression because some processes occur at the same time as others. Thus, the water stored in glaciers, ice fields, and snow plays a significant role in the cycle.

Frozen water flow contributes to the change and flow of rivers, creating movement and sometimes even natural disasters. However, it is a vital component of the water cycle. 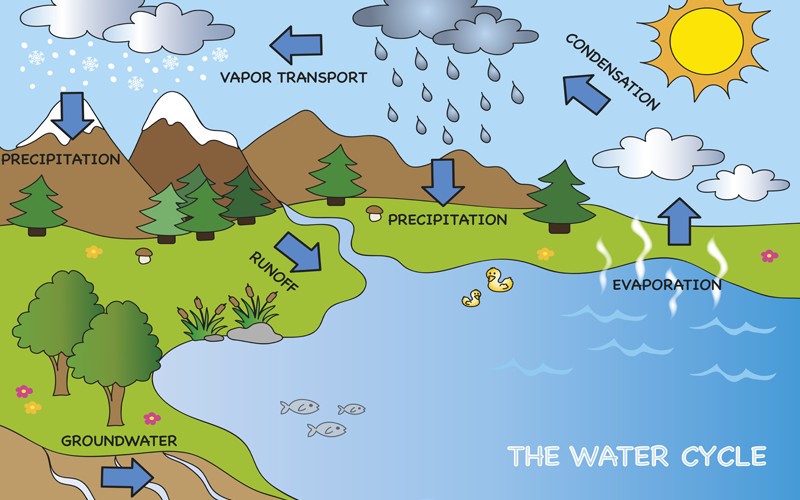 The process of the water cycle.

The amount of water flowing in a river, stream, or creek. After rain falls, most of the water runs downhill over land in these bodies of water.

Naturally, the water that ran into rivers, streams, and creeks remains in these natural “deposits” on the Earth’s surface.

Stored freshwater is vital for the survival of living organisms since physiologically, they are incapable of drinking salt water. Moreover, the amount of water in rivers and lakes is constantly changing.

A small part of the precipitation water infiltrates the soil and rock materials. While some water remains in the most shallow layer, the rest infiltrates deeper and can replenish groundwater.

Some groundwater discharges into streams of surface water.

Springs are common water bodies where groundwater flows to the surface.

After discharge and storage, water can evaporate again through plants and re- enter the atmosphere.

Water stored underground moves slowly. These aquifers are useful, last a long time, and make up a deposit that is part of the water cycle.