The Antarctic Ocean, or the Southern Ocean, is the last ocean to be designated as such. Indeed, not all countries and researchers recognize it even though the U.S. Board on Geographic Names and the International Hydrographic Organization recognizes it already. Its limits were defined by this organization in 2000 but need confirmation from most oceanic agencies and administrations.

It differs from the other oceans as it is the only one that surrounds a continent. It comprises the waters located in the southern hemisphere, whose boundaries are the Antarctic Convergence or latitude 60° south and the Antarctica coast. It covers all the 360° of longitude. It connects the principal southern oceanic basins as well as the sea surface with deeper layers of water.

The Antarctic Ocean, has an area of about 21.96 million square kilometers and includes:

This ocean has the largest ocean current, called the Antarctic Circumpolar Current.

Properties of the Antarctic Ocean.

This ocean has the largest ocean current, called the Antarctic Circumpolar Current, and since it connects the Pacific, Atlantic, and Indian Ocean basins, it influences the climate of the entire planet. It takes 135-145 million cubic meters of water per second from west to east along 20,000 Antarctic kilometers at a speed of 0.5 meters per second. This current distributes heat and influences rainfall patterns and temperatures. 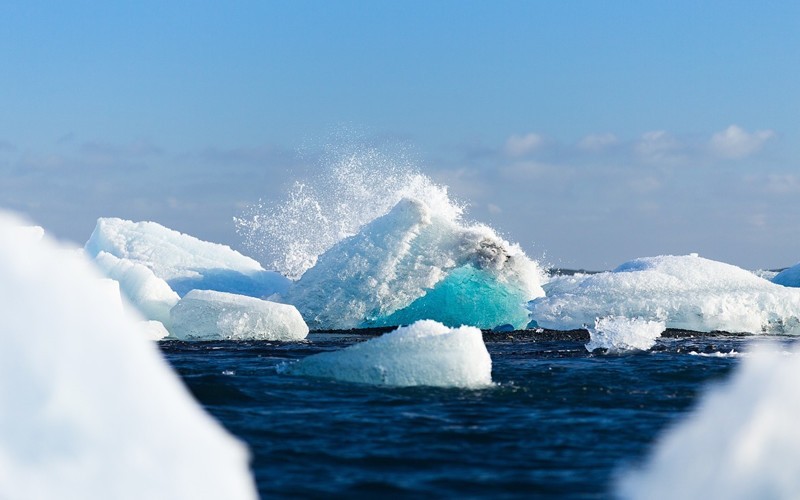 It has an average depth of 4000-5000 meters and touches around 17,968 kilometers of Antarctic coastline. A continental shelf about 260 kilometers wide and a maximum of 2600 kilometers lies beneath this ocean.  Its temperature ranges between 10°C and -2 °C, but it has the strongest winds and waves in the world, as the temperature of the ice contrasts the open ocean. During winter, the sea freezes at a latitude 65° south at the Pacific and a latitude 55° south in the Atlantic Ocean sector. During winter most coastal waters are frozen except in some areas.

Salinity is lower in the north, near the Antarctic Convergence where the colder waters flow below, the less cold waters of the Antarctic convergence. This ocean is a huge deposit of carbon and contains about 50 times more than the atmosphere.

Economic Importance of the Southern Ocean.

Due to the low levels of iron and sunlight, productivity is not high. It is rich in nutrients and manganese nodules as well as possible oil and natural gas deposits. It is also home to over 10,000 species, all perfectly adapted to the weather conditions, such as penguins, squids, whales, seals, krill, and a variety of fish.

Fishing is relatively fruitful, being krill and hake the most caught species. Between 2006-2007 for example, 126,976 metric tons of these species were captured.

Illegal fishing affects the sustainability of the sea and reduces the availability of food for other species.

In the Antarctic territory, there are two seaports: McMurdo and Palmer. Offshore, there are a few anchor points. Not all the waters of this ocean are navigable due to the presence of ice blocks. Only a few research boats cross the latitude 60° South since neither private nor commercial navigation is allowed.

Conservation of the Antarctic Ocean.

The increase of ultraviolet radiation, as a result of the ozone hole, is a major concern. The ice whiteness reflects the heat and bounces it back into space, which increases the cold. Some experts think that ultraviolet radiation is responsible for the reduction of phytoplankton, the primary link in the food chain. Besides, illegal fishing affects the sustainability of the sea and reduces the availability of food for other species.

Some organizations implemented guidelines to diminish the abuse of its natural resources. For example, the International Whaling Commission prohibits whaling below latitude 40° South.

• It covers 20 percent of the surface of all oceans and 4.3 percent of the face of the earth.
• Its narrowest part is the Drake Passage, which has only about 1000 kilometers wide between South  America and Antarctica.
• It's the fourth largest ocean.
• The maximum depth corresponds to the South Sandwich Trench, which is 7,235 meters deep.
• The Antarctic Circumpolar Current carries 150 times more water than the flow of all the rivers  in the world.