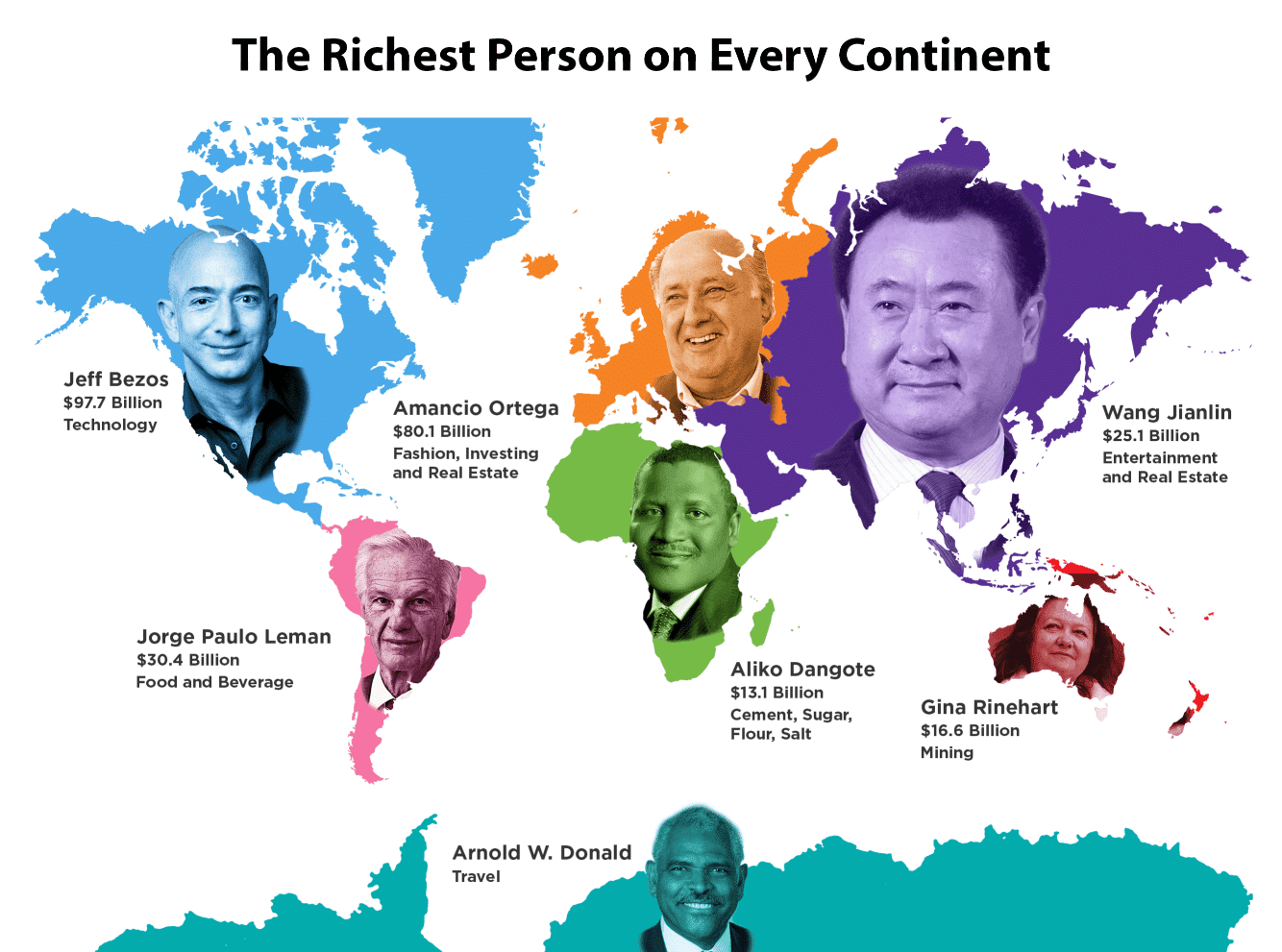 In today’s world, life seems to be revolving around one single gravitating point, a wealth of course. It is no doubt that the more you have it, the more power and luxuries you can afford for life. Some may just earn that to make both ends meet while many others make this effort to turn their bank statements into a phone number.

Those are the people who claim to be richest people on the planet. To garner yourself such success. It’s not some easy job. It requires years of hardships, struggle and one active mind full of innovative ideas. Here we will discuss the top 10 richest people in the world that are known to be wealthiest creatures on the planet. Most of them might have started from a scratch with several obstacles coming in their way. But their determination remained resolute. There will never back down, and today they have become a true inspiration for millions.

So, what are the names of those top billionaires? What are the secrets behind their accomplishments? Well, some of the names you might have already heard, as they are not just billionaires but also notable celebrities and public figures who also happens to be great philanthropists. Their businesses have taken the size of an entire empire and are still flourishing. Ranked down below are top ten richest people alive, bill gate, Amancio, and Warren Buffet are among the big names.

The descendent and the successor of the Koch family, David Hamilton was born on May 3rd, 1940. By degree, he is a chemical engineer who later became a businessman by joining the family business in 1979, by then he earned himself the position of president of the Koch’s Engineering and co-ownership of Koch’s industries. It is one of the biggest conglomerates In America. He used his influence as an active political activist and had joined the Libertarian Part of USA back in 1980 for the candidacy of Vice president’s seat. Ever since he became the exclusive vice president of the Koch industries, his accounts have shown a visible upgrade in figures.

The second member of the Koch family, who happens to be far wealthier than his brother, Charles De Ganahi Koch’s not only the co-owner of the Koch’s industry along with his brother David Koch but also the chief executive officer of the industry. Charles Koch is the 2nd most richest in the list of top 10 richest people. He owns the 42% of the total share of the company. Charles has invested great efforts in establishing the business he and David inherited from their father Fred C Koch. Initial the company was only involved in oil refining projects and chemicals manufacturing. But Today it’s industry is also serving to produce several different products which include equipment’s to control pollution, minerals, and fertilizers. Forest goods and various other technologies.

Michael Rubens, famously known as Mike, was born in February 1942.Mike Bloomberg is the owner and CEO of the biggest media company which he named after him Bloomberg L.P. this company is famous for providing global financial data and Bloomberg Terminal. This terminal is used as an aid by the investment professionals from everywhere. Before 1981, Bloomberg used to serve at Salomon Brothers but later twenty years brought him nothing but success and wealth which made him one of the biggest business magnate of America, also a philanthropist and an influential politician later. From 1999 to 2000, he also enjoys the position of chairmanship at Hopkins University.

“Oracle Corporation” this word might ring some bells in your mind, yes! At next we have here Larry Ellison, who remained the CEO of Oracle Corporation till 2014. Currently, he is active executive chairman. He is a successful entrepreneur and a businessman. He was born in New York City and studied at the University of Illinois. Later while serving at Ampex, he was greatly influenced by the work of Edgar F. His idea on relation database design laid as the foundation of Oracle’s success and turned it into a big success in the world of database vendors and raised it up to the level of Microsoft SQL Server and Sybase.

Who would possibly not know about Zuckerberg? He is the man of the era, who brought revolution in the world of social media with his co-founded social networking website named Facebook. Zuckerberg was studying computer programming at Harvard University, where he along with his colleagues first launched Facebook among Harvard’s various campuses and by 2012 this simple site became so excessively popular that it achieved the target of 2 billion users. The success and popularity of the Facebook earned Zuckerberg the fortune of US $55.3 billion.

Bezos is at 5th number in the list of top 10 richest people in the world. He is known as an American investor, an entrepreneur and a philanthropist who was born on 12th of January 1964. The secret of his popularity and great bank balance lies in his ownership of Amazon.com. Amazon is the largest online shopping portal in the world which is providing the variety of products, services, books, audio and video streaming. Amazon is not the mere source of income for Bezos; he is also running successful businesses in the field of aerospace and print media. His media venture started back in 2013 when he bought America’s leading newspaper, The Washington Post newspaper.

Carlos is at 4th number in the list of top 10 richest people. He is the only Mexican businessman and billionaire in the list. He is also a great investor and a philanthropist. Grupo, Carso, the leading conglomerate of Mexico is the major source of his big fortune. Grupo Carso is working on many different fronts which include media sector, retail, real estate, high technology, healthcare, education, transportation, energy and the list continues. In fact, 40% of the listings on MSE (Mexican stock exchange) belongs to Carlos. The total amount of fortune he owns is approximately 6% of the total revenue the country generates.

Warren Buffet is placed at the third position in the list of top 10 richest people in the world. Who is among the top ten philanthropists in the world is also America’s big business magnate. His investing skills are appreciated throughout the world, and he is being acknowledged as the most successful investor of the world. The source of his fortune is the Berkshire Hathaway. He is the CEO and the chairman of the company. He is not only the wealthiest person in America but also the most influential of all as stated by “Time” in 2012.

Amancio Ortega Gaona is placed at 2nd position in the list of top 10 richest people. He is the founder of Inditex Fashion organization, which is known for its most profound and prestigious clothing line named Zara and other accessories products. He is not only the wealthiest person of a whole of Spain but also in whole Europe. According to the recent reports presented by Forbes, the net worth of his assets is estimated to be US $77.2 billion.

LIST & NAMES OF TOP 10 RICHEST PEOPLE IN THE WORLD: