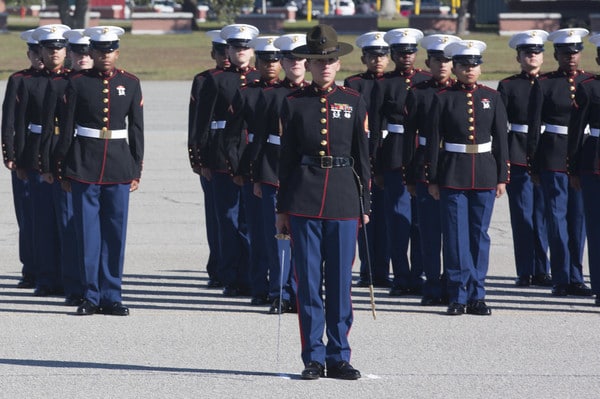 Marines are also called as naval infantry or marine corps; it is a kind of special force that specializes in supporting army and navy sting operations both on the land and in the sea.The marines corps are usually considered as the part of the navy of any country of countries. But in some countries it can form special armed branches like royal marines corps or US marine corps. Marines throughout history have performed innumerable tasks such as border protections at land and sea, boarding of military vessels and armaments, and providing and transporting manpower for raiding purposes.

With the start of the 20th century, the land operations tremendously increased as the world moved towards the warfare, in a similar way a need for specialized skilled and technically evolved and more trained marines corps also evolved. They are very important for performing sting operations.They mostly use landing crafts, hovercraft, vehicles and helicopter landings and clandestine operations.

Us marines corps strength increased from 175,000 to 202,000 in 2007, and it was announced that US marines force will increase in 2011.2011. Although the long war indulgence of United States in the different regional wars has maintained the strain on its marine.The Marines are expected to grow by 5000 every year.In the year 2008 the US Marine grew by about 12000 in a year.The total marine corps enlisted in 2008 accounted as 16,696 Marines including 8,423 first term Marines.

South Korea has the world’s second largest marine corps in the world.Its marine corps operate to protect the islands, but it is also the big task.It has at present 25000 personnel. Its. Its marines corps operate under the army. For the operation of the biggest operations, its marines have the special armed amphibious vehicles and fire support system. The ROK marine corps is the special force operating on land.It can conduct ground battles, giving security services and facility protection, etc.

The Royal Thai Marine Corps has the strength of about 25000.The Thai people are called amphibious people because they travel on boats and live near water. Most of marines corps are deployed at the Sattahip naval base.The marine police serve as the coast guard and protect the coastal borders.It has 63 armed patrol craft and 62 boats with small armed equipments.

Indonesia is the large country with a large number of islands it is an Archipelago. The Indonesian marine corps include about 1000 personnel in 1990’s.It was first deployed for coastal protections and flying squadrons of airplanes, and also the transportation services and helicopter flights.Marine Corps also received amphibious vehicles from French 30 ex -East naval ships were added in marines corps from Germany.

The Mexican marine corps also known as the Infantaria de Marina is the fifth largest marines corps in the world.Its major duties include protection of the jurisdiction and conducting immense naval operations.In March 2007, the Mexico marine increased its reaction battalions along with amphibious forces.Based on security policy reorganization of marine corp was carried out.

The ROCMC Republic of China Marine Corps in peacetime have the duty of the naval bases security and also acts as the immediate response force in the times of emergency.During war times the marines corp act as the operational combat forces.The Chinese Marines are armed with the M41s and wheeled mm armedAFVs personnel carriers.Marines in China are also used to guard major buildings and strategic areas of the country.

Russian Marine Corps stands seventh in the world.They are also known as the ‘black berets’ are the elite forces of the Russia.The Russian marine is divided into the different fleets that include Baltic feet, Pacific Fleet, has the little fire power and also the less resistance power.

In 2012, the Philippines marine corps deployed 800 personnel near the south China sea.Its main function would include patrolling the sea area.Philippine’s marines corps was created in 1950 since then the marine corp are highly trained and possesses the capability of hard hitting, are highly mobile, and is composed of dedicated officers.

UK marine corps is also called as the royal marine.They contain a lot of combat forces, and the number of the UK marine’s troops is there to uphold the country’s sovereignty and to the country any terrorist activities along with its huge firearm capability and quick response agenda.

French marine corps are also called as the Troupes de Marine. They are the branch of French army which served France in the past centuries and are also playing their role today to maintain territorial expansion or security.They are also maintained to keep the army units intact in the regions of Africa or others.They also maintain large combat and operational forces which are always in the position of a standby.